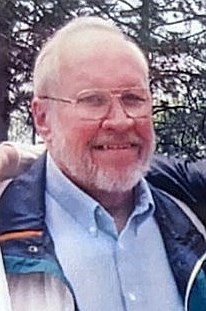 Victor Mathurin, age 87, of Ellicott City passed away on Thursday, January 20, 2022. Victor was born June 24, 1934 in Grafton, Massachusetts to a long line of military veterans, Vic entered the United States Air Force after high school where he served as a Radar Technician during the Korean War. He then used his GI bill to go to University of Massachusetts, then attended Catholic University after relocating to Maryland. He was the first member of his family to earn a Master's Degree. He has always valued education, which he imparted on his family. Vic went on to spend his career working for the government as a technical writer for the NSA where he even wrote a speech for the NSA director. He is remembered for his sharp wit and dry sense of humor, value of tradition, love of animals (his pet cats and dogs in particular), and for always putting his family first. Some of his favorite pastimes were watching and betting on horse races, playing poker, watching musicals, and spending time with family. He also enjoyed cooking, particularly seafood, reading, and anything involving the beach or being near the water. Also a baseball and football fan, he followed first the Red Sox and Patriots which were later usurped by the Orioles and Ravens after his relocation to Maryland. He is remembered fondly by his two sons, Greg and Peter, his previous wife Patricia, and by his three granddaughters, Dawn, Claire, and Zoe. A Memorial Gathering for Victor will be held Saturday, February 5, 2022 from 11:00 AM to 11:30 AM at Gary L. Kaufman Funeral Home at Meadowridge Memorial Park, 7250 Washington Blvd, Elkridge, MD 21075, followed by a Memorial Service at 11:30 AM. Fond memories and expressions of sympathy may be shared at www.garylkaufmanfuneralhome.com for the Mathurin family.
See more See Less

In Memory Of Victor Mathurin