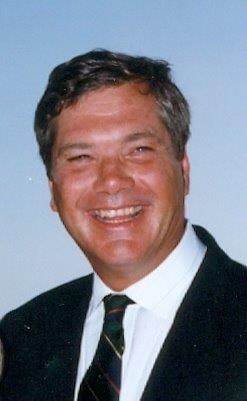 Charles Wood "Woody" Johnson passed away peacefully on April 9, 2015. Woody was born in Pittsburgh, PA, on May 1, 1953, to Robert Grey and Kathleen B. Johnson. The fifth of seven children, he attended elementary school in Webster Groves, MO, before moving to Denver, Colorado, where he graduated from Thomas Jefferson High School in 1971. He always enjoyed sports even at a young age, whether it was setting records in swimming, starting on the football team, on the golf course, or skiing in the Rockies. After graduating from Montana State University with a degree in business administration, Woody moved to San Diego, where he attended the Thomas Jefferson School of Law and graduated in 1982. While studying law at night, Woody managed a soft-frozen yogurt store in La Jolla, the first of its kind in the San Diego area. After graduating from law school, Woody went into business, where he developed a unique technique for recycling precious metals from obsolete main frame computer boards. He later devised a method for recycling computer memory chips for use in video game players. Woody parlayed his success into founding Micro-C. As national sales manager for nearly a decade, Woody grew company sales 100-fold, eventually selling the business to an American Stock Exchange-listed company. Woody also co-founded ColorLink, Inc., a liquid crystal light engine company in 1995, which was bought by RealD in 2007. The technology developed by ColorLink laid the foundation for the modern 3D movie industry including such films as Avatar and Gravity. Despite his incredible acumen and achievements, Woody was a man who shunned pomp and circumstance and cared only about his friends, loved ones, and what he could do to make the world a better place. He loved sharing his enthusiasm for sports, spending Fridays and Saturdays with his friends at The Farms Golf Club for over 10 years. He also loved tennis and baseball, and he especially looked forward to Football season and spending time with his friends watching the games. Everybody Woody came in contact with loved spending time with him. Most of all, Woody was there to lend a hand whenever he saw someone in need. He dearly loved his family, whom he supported through times of illness and hardship, and whose successes he was deeply proud of. Unlike so many, he cared about the world beyond his inner circle and donated substantial time and resources to an orphanage in Mexico for over 30 years, where countless young girls transitioned from loss and poverty to better lives. Woody is survived by his first wife, Jan Thorne, his second wife, Linda Johnson, his older brother, Robert G. Johnson, older sisters JoAnn Henningsen and Jennifer Looney, and his two younger sisters, Sara Cohen and Kristina Johnson, as well as eight nieces and nephews and numerous caring friends. He is predeceased by his parents and sister, Kathleen Laveau. Always possessing a profound sense of humor and a contagious smile, he was loved by all, and will be dearly missed. In lieu of flowers, donations may be made to the Salvatierra orphanage in Tecate, Mexico. Donations may be addressed to Los Amigos de Los Niños, 527 Eleventh Street, Del Mar, CA 92014. Arrangements under the direction of El Camino Memorial - Encinitas, Encinitas, CA.
See more See Less

In Memory Of Charles Wood Johnson