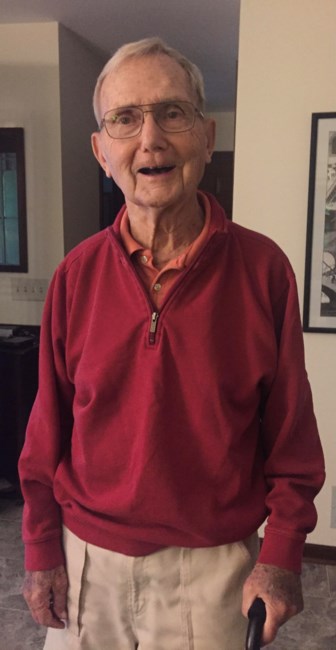 Richard Crowell, loving husband, father, brother, uncle, and friend, passed away on November 22, 2021, in Englewood, Florida, at the age of 90. Richard, known as Dick, spent his retirement years in Englewood after finishing his career at the Wooster Brush Company in Wooster, Ohio. He is survived by his wife of 65 years, Nancy, and their three children and spouses: Steve (Karen), Randy (Becki), and Wendy (Alan), He was also the proud grandfather of Kevin, Danny, Bryan, and Evan. Dick was a kind, generous, quiet person who possessed what is known in the family as the "Crowell" sense of humor (dry and observant, with a touch of silly). He was an engineer in his early career and remained one in spirit throughout his life. Even in the hospital shortly before he passed away, he was curious about the construction and composition of the shelves in his hospital room -- a true Dick Crowell moment. Dick had a lifelong passion (some might say addiction) to golf, as well as an affinity for physically challenging vacations camping and canoeing at Ontario's Quetico Provincial Park. In keeping with his somewhat restless nature, Dick and family moved many times as his managerial career developed, spending happy years in various Ohio locations, as well as Massachusetts, Connecticut, and New York. Through it all, Dick faced the ups and downs of life with tenacity and humor, and instilled in his children the same humility, devotion to fairness, and respect for others that he lived by himself. Dick was predeceased by his brother and sister, Phil and Carolyn, with whom he shared countless childhood adventures and mischief growing up in Wisconsin, Illinois, and Minnesota. Dick will be sorely missed by his family and all who had the privilege to know him. A memorial service will be held in Wooster, Ohio, in Spring/Summer 2022. Please no gifts or flowers at this time. Any contributions may be made to Tidewell Hospice, 5955 Rand Boulevard Sarasota, FL 34238, or https://tidewellfoundation.org/donate/.

In Memory Of Richard J. CROWELL