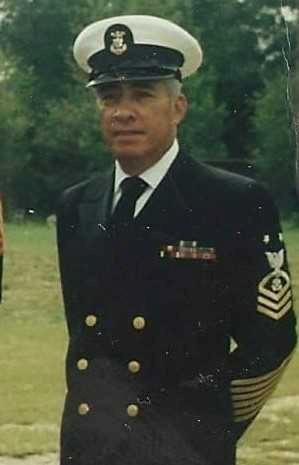 Pedro P. San Juan, age 96, passed away on Friday, July 29, 2022 at his residence. He was the loving husband of the late Catherine D. (Fennel) San Juan with whom he shared nearly 70 years with. Born in Savannah Georgia, he was the son of the late John Vivencio and the late Guadalupe (Rivera) San Juan. He joined the Coast Guard Auxiliary at 15 years of age, served under the command of the United States Navy in World War II and finally retired as a Master Chief in the United Coast Guard in 1966. After his retirement, he began working in real estate investment when not traveling around the country in his RV for extended visits with family. Pedro was a social homebody that everyone adored. He was known for playing practical jokes on the ones he loved, for his trademarks of Tootsie Pops and rubber bands, keeping everyone’s bellies full of donuts, malasadas, and Portuguese sweet bread. He enjoyed playing the mandolin, talking on the phone, especially with his brothers, monitoring the news and hoping every day for a better world. He is survived by his brothers, William San Juan of Riverview, Florida and Ramon San Juan of Corpus Christi, Texas; a sister, Ramona (San Juan) Dawson of Phoenix, Arizona; a stepdaughter, Donna Kay Smoot of South Charleston, West Virginia; grandchildren, Tara Wotton and her husband Jaime of Fairhaven and Don San Juan and his wife Meaghan of Foxboro, MA, Nicole San Juan of Stuttgart, Germany, Michael San Juan of New Bedford, MA, and Kim McGown Chapman of S. Charleston, WV. He also had several great grandchildren; Samantha, Kayleigh, Zackary, Kaelyn, Keira, Emily, Avery and Max, as well as many nieces and nephews. He was the father of the late Don Pedro San Juan and the late Rivera “Vera” San Juan. His visitation will be held on Monday, August 15, 2022 from 10:00 – 11:00 AM in the Waring-Sullivan Home at Fairlawn, 180 Washington Street, Fairhaven with an 11:00 AM funeral service. Burial in Riverside Cemetery, Fairhaven. To leave a note of condolence: www.Waring-Sullivan.com
See more See Less