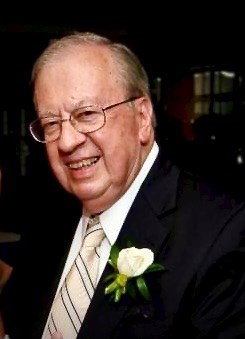 RICHARD JOHN “DICK” MINNICH, age 87, passed away Saturday, May 15, 2021. He was a beloved husband of 61 years to Ruth (nee Barclay); Loving father of (daughter) Karen Bolyard (Alan) of Cranberry Township, PA, and (son) Kevin of Fairview Park, OH; Grandfather of Andrea Lutz (Jon), Kristen Drevna, Mitchell Minnich, David Minnich, and Hannah Minnich; Great grandfather of Hailey Lutz; Brother of the late Donald Minnich; Uncle of many. Richard graduated from Kent State in 1956 with a degree in chemistry and was a member of the Theta Chi Fraternity. Later, he graduated from Cleveland Marshall Collage of Law in 1965 where he earned his Juris Doctor. Richard proudly served the U.S. Army, where he specialized in weather technology, while stationed overseas. After leaving his military service, and receiving his law degree, Richard went to work as a lawyer for such companies as Union Carbide and Diamond Shamrock. He later was hired by Fay Sharpe, LLC as an attorney, and Patent Agent. He rose to managing partner of the firm and retired after 45 years. Richard was a practicing member of the Ohio Law Association for over 50 years. He was also an avid Boater and a longtime member of the Vermilion Boat Club. We invite you to celebrate Richard’s life Wednesday, May 19th, from 4-8pm, in the Corrigan Craciun Funeral Home, 20820 Lorain Rd, Fairview Park, Ohio 44126. There will also be a small memorial service at the funeral home Thursday morning at 11am, followed with a Private family Burial. For more information call Corrigan Craciun Funeral Home at 440-331-0500.
See more See Less

In Memory Of Richard John Minnich