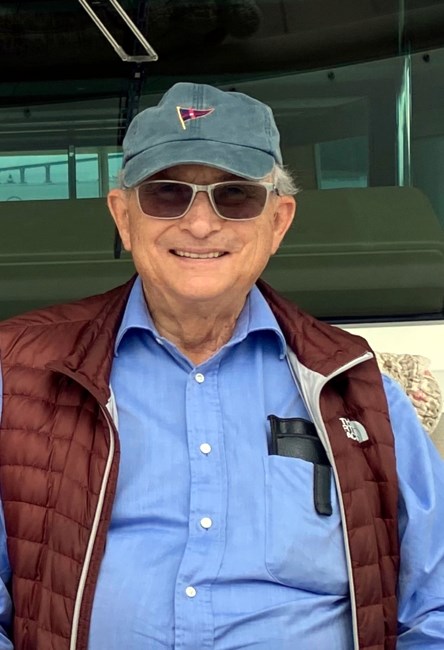 Gurdon Bayne Wattles, age 85, passed away unexpectedly Sunday, September 27, 2020 in Newport Hospital. He was the loving husband of Kathleen (Knudson) Wattles to whom he was married for 20 years. Born in New York, NY, the son of the late Gurdon W. and Elizabeth (Bayne) Wattles he was a longtime resident of Little Compton. At the core of his life was his loving family, his wife, Kathy, daughter, Elizabeth “Wendy” Wilkes; sons, Gurdon “Stan” Wattles and his wife Jill DeWare and Alexander Wattles; two stepdaughters, Kimberly Anderson and her husband Robert and Kirsten Stephens; twelve grandchildren, Robert, Christopher, Matthew and Elizabeth “Sweet Pea”, Alexander, Bennett, Lucas and Caroline Wattles, Sam Anderson and Isaiah, Spencer and Quinten Stephens and three great-grandchildren, CJ, Jacquelyn and Everleigh Rose Wilkes. Gurdon graduated from the Millbrook School, Phillips Academy Andover '53, and Cornell University Class of '57, he was retired President and Director of the former American Manufacturing Co and retired Director of the former Eltra Corporation and the Safety Railway Corporation. Gurdon’s passions were numerous, including sailing, education, history, music, the environment and wildlife which were manifest in his active involvement in numerous charitable organizations. His deep involvement on the Board of the New Bedford Whaling Museum captured all of these interests. As a former Director of the Newark Museum (NJ) he was so impressed with their Explorers Program, he was instrumental in starting a similar student Apprentice Program at the New Bedford Whaling Museum. His many sponsorships of at risk students in the New Bedford Star Kids Scholarship Program displayed his foundational belief in education for lifelong success. His love of music included his alliance with the New Bedford Symphony and his lengthy participation on the Board of the New Haven Symphony were key to his appreciation of artistic and dedication to the technical and management aspects of these organizations that he valued so highly. Along with music, he fell in love with the purpose and mission behind High Hopes Therapeutic riding in Lyme, CT. Consistent with Gurdon’s love of horses and education, he joined the Board, volunteered, and initiated the training program for therapeutic riding professionals. Gurdon had a real connection and passion for the natural environment, contributing a great deal to land conservation and wild life preservation. His New Jersey farm land was placed into the Green Acres program and now is the home of the New Jersey Audubon's Wattles Stewardship Center in Port Murray. Gurdon was also active in the Sea Research Foundation, Mystic Aquarium where he previously served as a board member. In Rhode Island, Gurdon learned of the Audubon Society of Rhode Island’s opportunity to build an education center in Bristol. Gurdon helped to make it a reality and joined the Board realizing this opportunity as another chance to promote environmental education. He is a member of the United Congregational Church of Little Compton where he had served as a Trustee and was active on the Development and Building Committees. Later, while seeing the need for the Westport River Watershed Alliance in Massachusetts across the State line, Gurdon participated by sharing his insight into the new building plans and development of an educational video to help illustrate the ecological dynamics of the river system. Gurdon enjoyed the camaraderie of many friends at the Cornell Club (Founding Member), the New York Yacht Club, the Watch Hill Yacht Club (Charter Member), the Seawanhaka Corinthian Yacht Club, the Misquamicut Club (Charter Member), the Sakonnet Golf Club, the Acoaxet Club, the Elephant Rock Beach Club, the Somerset Club, Boston and the Sakonnet Point Club, the New Haven Country Club, the New Haven Lawn Club and the Pauma Valley Club. Gurdon was a tireless creator – be it ideas, building structures or anything that floated.. His energy, curiosity, quick sense of humor and probing analytical thinking and thorough knowledge of history were always on display. He loved to be on the water, sail, ride his horse, share his chair with his cat Neige and explore technology where he was most fascinated by the developmental process. In lieu of flowers, contributions in his honor may be made to any of these favorite charities: Wildlife Rehabilitators Association of Rhode Island, 2865 Tower Hill Road, Saunderstown, RI 02874, New Bedford Whaling Museum, 18 Johnny Cake Hill, New Bedford, MA 02740 or New Bedford Star Kids Scholarship Program, PO Box 50494, New Bedford, MA 02745 or Audubon Society of Rhode Island, 12 Sanderson Rd., Smithfield, RI 02917, or Audubon Society of New Jersey, 9 Hardscrabble Road, Bernardsville, New Jersey 07924 or New Haven Symphony, www.newhavensymphony.org. or Westport River Watershed Alliance, 493 Old County Road, Westport, MA 02790. A Celebration of Life will be held Sunday, August 1, 2021 at 1:30 PM at Dancing Oaks Farm, 43 Rockbridge Drive, Little Compton, RI 02837.
See more See Less

In Memory Of Gurdon Bayne Wattles