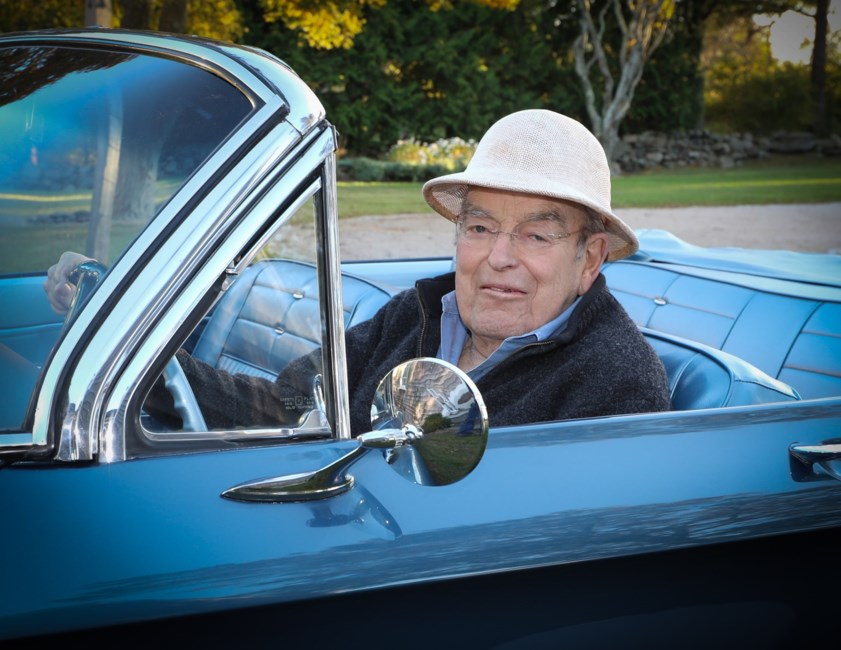 Randolph Kunhardt Byers, Jr. passed away peacefully on August 17, 2021 surrounded by his four beloved children into the arms of both his predeceased parents Dr. Randolph K. Byers, his namesake, and Margaret Cooke Byers and his wife Eleanor (Nunnie) Atwater Byers. Born October 6, 1927, Randolph, known affectionately as Randy, grew up in Milton, MA and attended Milton Academy graduating in 1945. He and his three sisters enjoyed their summers in Little Compton, RI where he ultimately met his future bride and wife of 66 years, Nunnie Atwater. After graduating from Milton Academy, he went to West Point–Pepperell Manufacturing in Georgia where he worked in a textile factory for a year. From there, he went to New York City where he lived with his eldest sister Franny and continued working for West Point-Pepperell as a showroom salesman. Randy enlisted in the Army where they recognized his technical prowess and made him a weather equipment trainer of all military personnel. On August 25, 1951, Randy married Nunnie who he had known through friends during his summers in Little Compton. Nunnie joined him in Lawton, Oklahoma near the Army base where they crafted a happy, fun life filled with friends. They then returned to Rhode Island where Nunnie gave birth to their first of four children, Elizabeth (Libby). After a brief year in Weston, MA, they moved to Wilton, CT while Randy continued in his sales role with United Car Fastener. In 1955, Randy oversaw the building of what would be the first of two houses in Wilton, CT (and two more homes in Little Compton, RI) while also bringing son Bartlett (Bart) Cooke into the world. Two more daughters were to follow, Eleanor (Ellie) and Mary. Meanwhile, in 1961, Randy, with initially one engineering partner, started Nexus Incorporated in Stamford, CT, a designer and manufacturer of proprietary audio plugs and jacks for primarily military aircraft. Randy was in charge of sales and the managing of the business as Executive VP, Secretary & Treasury - perfect roles given his wonderful relationship skills, and made a significant contribution to the growth of the business employing 40+ people at the time of Randy’s retirement in 1998 at age 71. Randy loved his employees like family and fostered a strong culture of loyalty and affection at Nexus. In addition to being a successful business owner and manager, Randy was a true believer in the importance of giving back to the community. Throughout his adult life, Randy served on countless boards including most notably VITAM (a drug addiction recovery program), United Way, The Nature Conservancy of Connecticut, and the Little Compton Historical Society, the latter of which he was an active board member via Zoom during the pandemic right up to the time of his passing. He was passionate about being on the ocean, loving fishing off his Granny Carr classic Brownell boat and going on sailing adventures on his 51’ Bristol sailboat Nexus. He loved cars including his most recent 1963 Corvair. He was passionate about land and nature conservation as reflected in his numerous community boards and was an avid gardener. He loved travel which included a nature conservation sponsored trip to Jamaica as well as family/marital trips to Haiti, Mexico, England, Ireland, Budapest to Amsterdam waterways, Alaska, Copenhagen and more. And food: He did enjoy eating! Randy was a genuine people lover, always showing kindness and respect to all and a deeply devoted husband and father who loved more than anything in life being surrounded by his children and grandchildren. He leaves behind a very wide and deep network of friends, colleagues, and family. In addition to his parents and wife, Randy was predeceased by two of his sisters, Francis (Franny) Horowitz Hatch and sister Susan (Sue) Plant. Living to carry on his memory are his children Elizabeth (Libby) Moore and husband Raoul of Little Compton, RI, Bartlett (Bart) Cooke Byers and wife Bonda of Denver, CO, Eleanor (Ellie) Byers of Shelburne, VT and Mary Truslow and husband Charles of Little Compton, RI. Living to carry on his legacy of kindness and service are his adoring grandchildren Justin (Missi), Andrew (Raúl), Loren, Kelsey (Jason), Chas (Molly), Will and Graham. Living to carry on his generation’s legacy is his sister Margaret (Peggy) Wood of Cambridge, MA. He also is survived by many beloved nieces and nephews. A celebration of Randy’s life will be held Friday, September 3rd at 2:00 p.m. at Fore-An’-Aft, 696K West Main Road, Little Compton, RI. In lieu of flowers, donations in his memory may be sent to the Little Compton Historical Society www.littlecompton.org and to Stay At Home www.stayathomeinlittlecompton.org
See more See Less