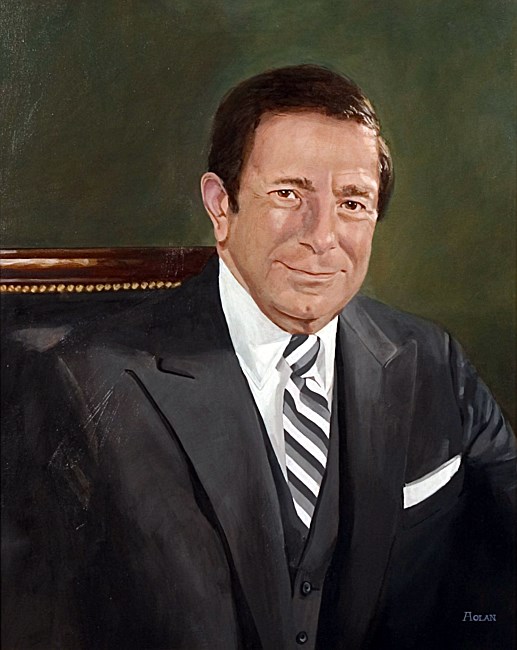 On June 3, 2020, Alexander Louis Stevas, 97, of Alexandria, VA, passed away peacefully at the Hermitage.

Appointed in 1981, he was the 17th Clerk of the United States Supreme Court. He served the Court during the tenure of many notables including his friend and neighbor Chief Justice Warren Burger and Justices Thurgood Marshall, the first African American Justice, and Justice Sandra Day O’Connor, the first female Supreme Court Justice.

Retiring in 1985, his portrait, painted by artist Annette Polan, was presented to and received by the Supreme Court in 2003. While part of the collection of the National Portrait Gallery, his portrait hangs in the Supreme Court Building with other previous Clerks. Mr. Stevas served the judicial system for more than 40 years as the Clerk for the District of Columbia Court of Appeals; the Chief Deputy Clerk for the United States Court of Appeals; and as an Assistant United States Attorney. Mr. Stevas was the past President of the National Conference of Appellate Court Clerks and in1975, he received President Ford’s Management Improvement Certificate for excellence in improving operations of the District of Columbia Court of Appeals. He also taught criminal law and trial practice and procedure at the George Washington School of Law. Mr. Stevas also served in the U.S. Navy.

Alexander was born in 1923 in New Castle, PA, the son of a grocery store owner. During high school, he joined the Pennsylvania National Guard, Junior Troup Cavalry Unit where he learned to ride horses and use a rifle. In 1947, he married Gladys Christina Rauh, whom he had met at a USO dance. He completed his education at the George Washington University, earning both his Bachelor’s degree and his Juris Doctorate degree. They have one son, Alan, who resides with his wife, Erica in Fauquier County.

During his retirement years, Al, as he was known, finally had time for a social life. He was active at the Cherrydale United Methodist church and spent summers on Cape Cod at the family home in Wellfleet. He often spent his Saturdays at his son’s farm and was known about town as the Energizer Bunny. In 2006, he and Gladys moved to the Hermitage where he was part of the men’s committee, food committee and greatened new residents. After Gladys passed away in 2007, Al, at the age of 85, took up ballroom dancing. He loved taking lessons at Arthur Murray and often competed in dance competitions. In 2010, he married Margaret (Peggy) Thrasher Reeder who was also a resident at the Hermitage. Their wedding ceremony was officiated by Peggy’s daughter, Reverend Linda Spiers. Sadly, Peggy passed away in 2016 leaving Al a bachelor once more. Even into his 90s, Al was the social butterfly of the Hermitage.

The family would like to thank the staff of the Hermitage for taking excellent care of Gladys, Margaret and Al. Services will be private. Memorial donations can be made to Paws for Seniors, P.O. Box 738, Bealeton, VA 22712.

In Memory Of Alexander Louis Stevas