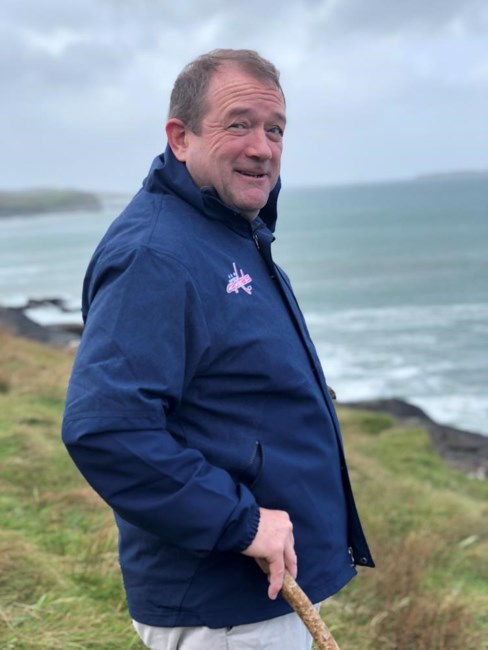 John Peter Connelly, 61, of McLean, Virginia, passed away at home on November 20, 2022 surrounded by his loving family. He showed remarkable courage and dignity during the course of his eight-month treatment for a rare and aggressive cancer, cholangiocarcinoma. John was born in Dayton, Ohio on January 31, 1961. He was raised in Milton, MA, one of seven children of Dr. John P. (Jack) Connelly, a noted pediatrician, and Martha (nee Cronin) Connelly. John graduated from Fenwick High School in Oak Park, IL and completed a postgraduate year at Phillips Exeter Academy before beginning his higher education at McGill University in Montreal. John transferred to The College of the Holy Cross in Worcester, MA, where he met his wife of 36 years and best friend, Margaret (nee McCloskey). After they graduated from the College of the Holy Cross in 1984, John joined the U.S. Navy. He proudly served six years active duty before joining the Navy Reserves and retiring in 2010 as a Captain. John and Margaret married in September 1986 and settled in Northern Virginia where they raised their children, Kate, Jack, Bridget and Maggie. He was a proud and loving husband and father, happiest spending time with his clan. He cherished family dinners, which often included his home cooked pizza and good-natured teasing, followed by a social nap on his hammock. He taught his kids to ski at Bryce Resort and spent his winter weekends regaling extended family with stories on chairlift rides. He grew up skating on a pond in his backyard and shared his love of hockey with friends and family at Capitals games. He was happiest at his home in Connemara, Ireland where he enjoyed timeless days with his family walking on the beach, taking “showers” in the chilly Atlantic, hiking in the hills, or just enjoying the views and each other's company beside a peat fire. Following his active-duty career, Connelly began serving as a voice in Washington for industries. For more than a decade, he had business and advocacy roles at the American Chemistry Council (ACC). While at ACC, John received an MBA from George Mason University. In 2003, John became President of the National Fisheries Institute (NFI), a trade association representing the US seafood industry. For the better part of 20 years, John traveled the world, visiting 40+ countries in six continents. Loath to leave his PIC (“pamperer-in-chief”), and even more unwilling to ever check a bag, John brought Margaret with him on many travels – on the condition that she pack a month's worth of clothes in her carry-on. John was a gifted speaker and master storyteller with an infectious personality who often used personal anecdotes about his family (containing just a kernel of truth) to break down complex industry issues and build connections. He was a fierce advocate for the men and women of the seafood community and beloved industry leader. During his extensive travels he always found time to send hand-written postcards to friends and family. John was a lifelong leader and mentor to his colleagues, friends, nieces and nephews, and children. He led by example and constantly used moments big and small to share lessons about how to live a life full of faith, courage, dignity, and love. John is survived by his wife, Margaret, and their children Kate Anderson (Jack) of D.C., Jack (Rui) of Phoenix, AZ; Bridget Treseler (John) of D.C.; and Maggie (Ryan) of Crested Butte, CO.; five sisters, Maureen Connelly, Revere, MA; Martha Burke (Dennis), Milton, MA; Eileen Dusek (Russ), Derry, NH; Marie Connelly, Kildare, Ireland; and Cathi Connelly, Milton, MA and a brother Michael Connelly (Mary Beth), Falls Church, VA; his in-laws Pete and Louise McCloskey, McLean, VA; sisters-in-law Mary Barry (Richard) Oak Hill, VA; Liz McCloskey (Peter Leibold) Falls Church, VA; Patty Christian (Peter) Eagle River, AK; and numerous nieces, nephews, grand-nieces and grand-nephews. He is preceded in death by his parents, Jack and Martha. John was a devout Catholic and a member of Saint Luke Catholic Church, McLean, VA. A visitation will take place at the Connelly home on Friday, November 25th from 6-8PM. Visitors are invited to toast John's life outside in the Connelly Síbín - please dress warmly. A Mass of Christian Burial will be celebrated on Saturday, November 26th at 11 AM at St. Luke's Catholic Church. In lieu of flowers, memorial contributions can be made to one of the following: Adaptive Sports Center of Crested Butte, CO Adaptive Sports Center is a therapeutic recreation program for individuals with disabilities that operates all year, with adaptive activities from skiing to mountain biking. John was an avid skier who was deeply moved and inspired by the work his daughter Maggie and her colleagues achieved at the Center. Contributions honor John’s love of skiing and the outdoors, while also recognizing John’s compassion and desire to share the joys of life with all around him. Contributions to the Adaptive Sports Center can be made here - by coping and pasting the link below. https://adaptivesports.salsalabs.org/johnpconnelly/index.html Contributions to College of the Holy Cross can be made here - by coping and pasting the link below. https://www.givecampus.com/campaigns/32936/donations/new?a=6020268 The John Connelly Intern Scholarship at the College of the Holy Cross Worcester, MA John mentored Holy Cross interns for 10+ years at NFI and took great pride in demystifying advocacy as a career. This scholarship, established by NFI, honors John’s love of education, the seafood industry and the College of the Holy Cross, and will be awarded annually to an NFI advocacy intern and benefit other interns at DC food trade associations. To contribute to the scholarship contact: Phil Gibson Holy Cross Advancement 1 College Street Worcester, MA 01610 For payment via credit card, call the Office of Advancement at 508.793.3079 and reference the John Connelly Internship.
See more See Less

In Memory Of John P Connelly