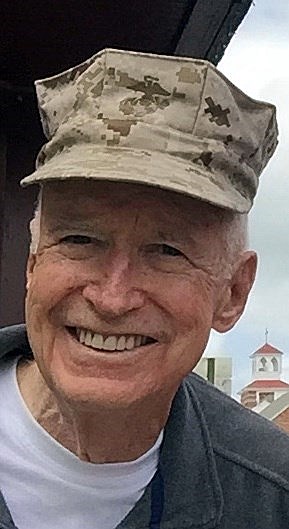 John "Jack" Grace, Ret. Col., USMC (age 92) of Arlington, VA passed away on September 21, 2020 at the Sylvestery at Vinson Hall. He lived a full and happy life and died peacefully in his sleep. Jack was the only child of John Grace of the Bronx and Delia Grace of Co. Meath, Ireland. He was a selfless man of faith, honor, strength, humor, kindness, loyalty and would do anything for his family who he loved dearly. He was a loving husband and best friend to his wife, Marie, who were married in 1951 (68 years). Jack was a provider, protector and ultimate role model to his six children. He was born in the Bronx, NY, and educated by the Christian Brothers at De La Salle Academy (Class of 1946). He gained notoriety early in his life when he was voted the most beautiful baby by the Bronx Memorial Hospital. He enjoyed his boyhood in the city and got to encounter interesting people, some thanks to his father’s job as a chauffeur. He inherited his parents’ strong work ethic and love of Irish music and Guinness. He enlisted in the U.S. Marine Corps and was sent to Parris Island, SC for recruit training. In 1947, he was given an opportunity to take the test for the U.S. Naval Academy and in June, was sworn in as a midshipman. After he graduated in 1951, Jack was commissioned a 2nd Lieutenant, USMC and was ordered to The Basic School at Quantico, VA. He served in the Korean War 1952-1953; then went on to the Marine Barracks in Portsmouth, NH; NROTC Unit at Villanova University; spent a year at the Army Infantry School at Ft. Benning, GA; was stationed in Okinawa, Japan, served in the 1st and 3rd Marine Divisions as a recon and rifle company commander and duty in Washington, D.C. He served two tours in the Vietnam War from 1967-1970. He attended the War College in Newport, RI in 1972 and then continued on to serve as C.O., 3rd Marines and Chief of Staff 1st Marine Brigade in Kaneohe, HI. He finished his career at Headquarters Marine Corps in Arlington, VA. After retiring in 1978, he continued his service by helping people in other ways. He became a more active member of St. Agnes parish and assisted at funerals at Arlington National Cemetery, Ft. Myer, VA as an Arimathean, by providing witness and appreciation to the fallen soldiers, sailors, airmen and Marines. He and his wife made a point to keep in touch with friends and relatives across the country. He always had a smile and a genuine interest in people and their stories. He was a good husband, a good father, a good Marine, a good friend and a great man. He was preceded in death by his wife, Marie. He is survived by his children; John, Michael and wife Sue, Peter and wife Sue, Margaret, Bernard and wife Sharon, Suzanne and husband Fintan; his grandchildren, Jared (Dori), Jamie (Paul), Jordan, Brittany (Paul), Thomas, Johnathan, Roman, Fiona and Bridget; as well as three great grandchildren and extended family. A mass of Christian Burial will be held on Sunday, September 27, 2020 at 7:30 p.m. at the Church of Nativity, 6400 Nativity Lane, Burke, VA 22015. Mass will be livestreamed on YouTube at “Nativity Parish Burke”. Interment will be held Monday, September 28, 2020 at 10:00 a.m. at Quantico National Cemetery. The mass and Interment will be livestreamed through Murphy Funeral Home of Falls Church's Facebook Page. In lieu of flowers, memorial contributions may be made to the Young Marines, 8th and I Unit. Checks can be mailed to “8th and I Young Marines”, 10016 Behun Drive, Cheltenham, MD 20623. Fond memories and expressions of sympathy may be shared at www.murphy-fh.com for the Grace family.
See more See Less

In Memory Of John Joseph Grace