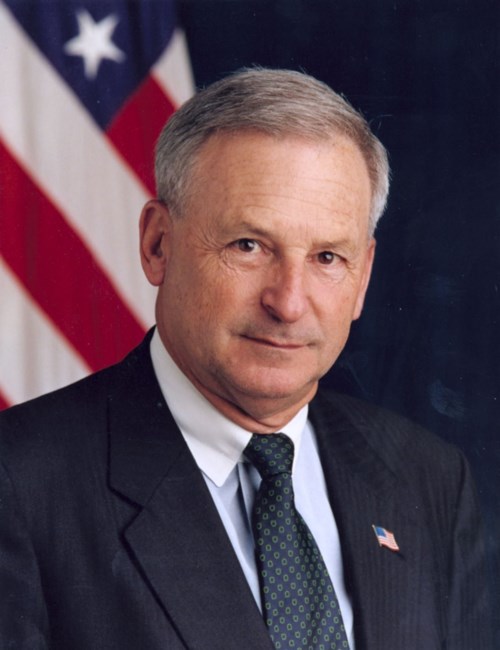 The Committal Service for Major General Mark V. Rosenker is scheduled for April 21, 2021, 1:00 pm, at Arlington National Cemetery. Mark V. Rosenker of McLean, Virginia passed away peacefully on 09/26/2020 at the age of 73, following a long, brave battle with brain cancer. He is survived by his wife of 27 years, Heather Beldon Rosenker. Mark Rosenker was born in Baltimore, Md. His parents were the late Major (USAF Ret.) Stanley and Mrs. Irene Constance Rosenker (nee Moskovitz), both military veterans of WWII. Mark graduated from Forest Park High School in Baltimore and the University of Maryland. Upon graduation in 1969, he was commissioned a 2nd Lieutenant in the U.S. Air Force via ROTC program. He served 37 years of active and reserve duty in the Air Force, retiring in 2006 with the rank of Major General. In his long military service, General Rosenker's decorations included the Air Force Distinguished Service Medal and the Legion of Merit. He was a graduate of the Air Command and Staff College and the Air War College. During his long and distinguished career in public service, Rosenker served under five U.S. Presidents, culminating in an assignment by President George W. Bush to the National Transportation Safety Board (NTSB) in 2003. In his nearly seven years with NTSB, he served as Member, Vice Chairman, and Chairman. Prior to his appointment to the NTSB, he served as deputy assistant to the President of the United States and Director of the White House Military Office. General Rosenker was traveling on Air Force One with President George W. Bush on September 11, 2001. Earlier in his career, Mark was appointed by President George H. W. Bush to serve on the American Battle Monuments Commission. During his career in civilian Federal service Mr. Rosenker received eight Presidential appointments, three of which required Senate confirmation. He held posts in the Department of the Interior, the Federal Trade Commission, and the Commodity Futures Trading Commission, and the U.S. Department of Transportation. Mark was the managing director of the Washington, D.C. office for the United Network for Organ Sharing (UNOS) from October 1999 to January 2001, following many years with the Electronic Industries Alliance. After the NTSB, Rosenker founded and was the president of the Transportation Safety Group LLC, a specialized consulting firm focused on transportation safety issues in the U.S. and around the world. Renewing his long passion for communications, Mark joined CBS network as its Transportation Safety Analyst, appearing often on television and radio to comment on trains, planes, and automobiles. He was a popular speaker at aviation and transportation industry events. In 2018, Mark and Heather founded The Rosenker Center for Political Communication and Civic Leadership at The University of Maryland. The Center is committed to the advancement of a diverse and productive democracy through the study of human communication. Mark will be remembered for his ebullient personality, his love for America, to his country, and as a beloved husband and friend. Celebration of Life/Memorial Service for Mr. Rosenker will be held at 11am on Friday, October 2, 2020 at the National Funeral Home 7482 Lee Highway, Falls Church, VA 22042, 703-560-4400 https://www.dignitymemorial.com/. Services will be streamed via Facebook. Please go to National Funeral Home's Facebook page to see the services live. He will be buried with full military honors at Arlington National Cemetery at a date and time to be announced. Honorary Pallbearers are The Hon. Bradley Blakeman, General Dale (Tim) White, James Davison, Col. Martin Ganderson, William (Bill) Hart, Thomas (Tom) Patton, Robert (Bob) Schwartzberg, Gary Smith, William (Bill) Snyder, Larry Schlenoff and Robert (Bob) Wilhelm. In lieu of flowers, memorial contributions can be made to the https://tunnel2towers.org/ or https://www.taps.org/.
See more See Less

In Memory Of Mark Victor Rosenker