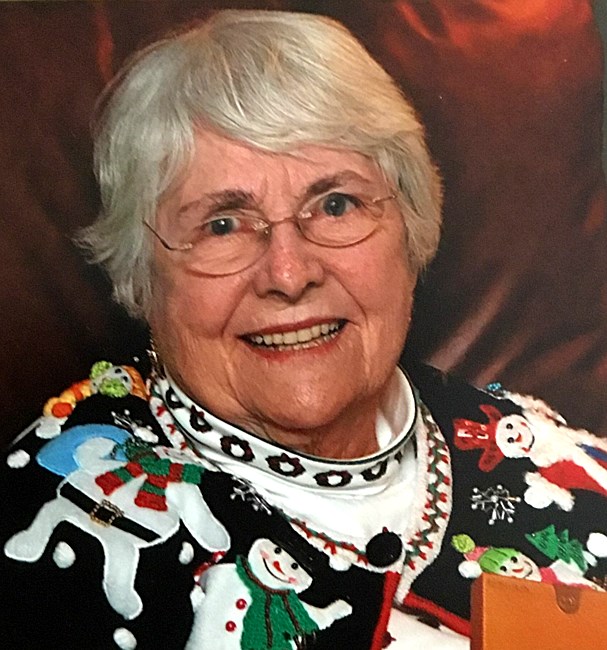 Nancy Mills Loving, 96, passed away on Saturday, December 16, 2017 in Fairfax, VA. She had been a resident of the Heatherwood Retirement Community in Burke, VA since 2012.

It was there she met and fell in love with LCDR John (Jack) Loving, who was soon to depart for duty on the USS Bon Homme Richard (CV 31) in the western Pacific. Nancy and Jack were married in Buffalo, NY on May 6, 1944.

After the war, they were both released from active duty and relocated to Linden, NJ where Jack resumed employment with Crown Central Petroleum. As the family grew to five children, subsequent moves were made to Fanwood, NJ, Baltimore, MD and Severna Park, MD.

Nancy received a Masters Degree in Elementary Education from Kean University in New Jersey and then taught for a number of years in Scotch Plains, NJ and Baltimore, MD.

Following her husband's untimely death in 1980, Nancy moved from Severna Park, MD to Naples, FL, where she lived until 2011. While there she took up quilting, learned to play golf and was president of the St. Vincent de Paul Society of Naples.

Nancy and Jack sailed down the Intracoastal Waterway in 1978 and to the Bahamas on their 36-foot Dickerson ketch named Compass Rose. They particularly enjoyed their two winters in the Abaco Islands. Throughout her life she also traveled to Japan, China, Egypt, Ireland, England, Canada, throughout Europe and the British Virgin Islands.

There are also numerous nieces and nephews who will miss her and treasure their quilts.

Fond memories and expressions of sympathy can be shared at www.murphyfuneralhomes.com for the Loving family.

In Memory Of Nancy M. Loving