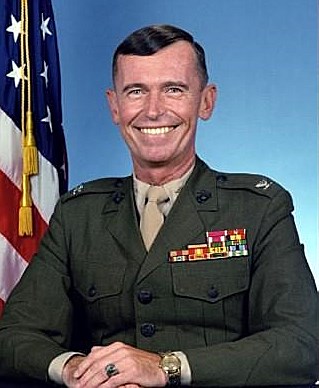 Robert F. Gibson “Falcon” Col, USMC (Ret.) passed away in Annandale, VA on December 26, 2017. Born in Dayton, OH on September 28, 1940 to Col Gardiner Scudder and Anne Walsh Gibson, USAF. He graduated from St. John’s College High School in Washington, DC in 1958 and the United States Air Force Academy in 1962 (with the original RTB class). Commissioned that year in the United States Marine Corps, he spent thirty proud years serving as an officer of Marines. He deployed twice to Vietnam (’65, ’68-69 to include operations during the Tet Offensive), commanded at the Squadron and Group level, wrote doctrine that became the foundation for the Marine Air Command and Control System, and participated in operations in Honduras, Beirut, Norway, the Philippines, Kuwait, and Desert Storm. Personal awards include the Legion of Merit with Gold Star, Bronze Star with Combat Distinguishing Device, the Meritorious Service Medal, and the Combat Action Ribbon. Three years after his retirement, the Marine Corps Aviation Association notified him that the Marine Officer Aviation Command and Control of the Year Award was re-named after him. A native of Northern Virginia for the last 30 years of his life, he hated how all of you were incapable of driving competently. Survived by his wife of 36 years Barbara, sons Robert (including daughter-in-law Brandy, and grandson James) and Stephan, and step-children: Holly, Candy, and Greg. Visitation will be Wednesday, May 30, 6-8 p.m. at Murphy’s Funeral Home, 1102 West Broad St., Falls Church, VA 22046. Full Military Honors ceremony and interment are scheduled for Thursday, May 31, 8:45 a.m. at the Old Post Chapel, Ft. Myer with burial following at Arlington National Cemetery.
See more See Less

In Memory Of Robert F. Gibson