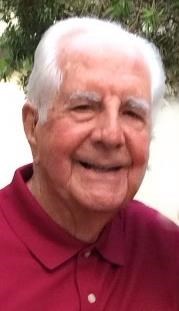 Albert John Brogan was born on December 5, 1919 in Philadelphia, Pa. as the youngest child in a large Irish family. He lived in an Irish community where he was schooled and met the love of his life, Margaret McCarthy, and they were united in a marriage which lasted almost 72 years until her death in 2012. He proudly served in the U.S. Navy during World War II and upon his discharge he began a career at the Atlantic Oil Refinery until his retirement in 1972. He and Margaret were blessed with five children Betty Lake (David) of Palm Coast,Fl.; Albert (Bernice) of Clifton, Pa.; Janet Nacrelli (Martin) of Port St. Lucie, Fl.; Kathie Gargiulo (John) of Palm Coast, Fl. and Margie Jones (Raymond) of Secane, Pa. They were the joyful grandparents of 12 grandchildren and many great grandchildren along with cousins in a blessed family. In 1950, they moved to Secane, Pa. to accommodate their growing family and lived there until 1977 when they relocated to Port St. Lucie, Fl. where they lived until Margaret’s death in 2012. While there they were active at St. Andrews Lutheran church, the Elks, Moose and Irish American Club where Albert served as its President. In 2012, Albert returned north to New Jersey to live with daughter, Kathie, whose husband had passed away. He relocated back to Florida with Kathie in 2015 and became a resident of Grand Haven until his death. He joined St. Mark’s by the Sea as a proud member and is recognized by multitudes as the old fellow in a cap pushing his walker along on Colbert Road’s sidewalk for years winter or summer. He recently participated in Palm Coast Mayor’s “Walk 90 Miles in 90 days” challenge in which he exceeded the goal and received a medal as the oldest participant. A celebration of his remarkable life will be held at St. Mark’s Lutheran Church on Saturday, October 8th at 11:00 a. m. and his family asks that in lieu of flowers donations be made in his name to your special charity.
See more See Less

In Memory Of Albert John Brogan