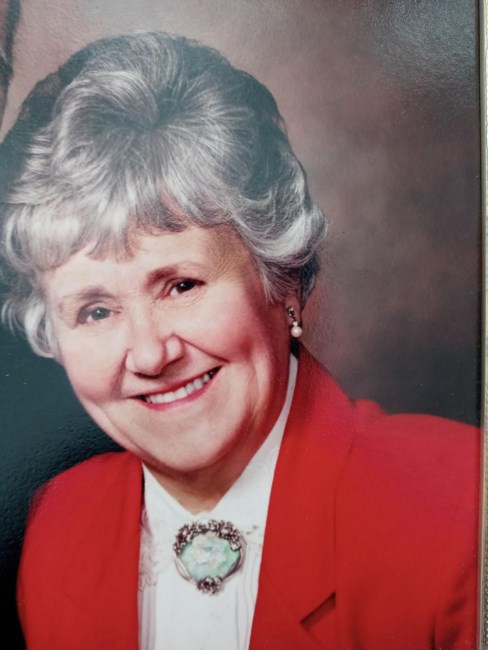 Ruth Lois McCarrell, aka Ruthie, Mrs. Gray, Aunt Ruth, Grandma Gray and GG...was born in Chicago, IL on October 4, 1928. She was child six of nine children born to Dr. William and Minnie McCarrell having two sisters and 6 brothers. Ruth is survived today by her youngest brother Dan and his wife, Joann. Ruth met Robert Gray when he began attending Cicero Bible Church where her father was the pastor. Dr. William McCarrell was one of the founders of the Independent Fundamental Churches of America. Bob and Ruth fell in love while enrolled at Wheaton College where she studied Christian Education and he studied geology. At Wheaton the couple was engaged to be married and according to the custom at Wheaton, rang the tower bell to announce their engagement. After graduation, she and Bob were married at Cicero Bible Church on April 7, 1951. Having completed two years of service in Army intelligence, Bob came home to continue his education at Moody Bible Institute in preparation for ministry. In 1952, the Lord blessed them with the birth of their only child, Peggy. As his Christian service assignment, Bob and Ruth served from 1953-1956 at Lawndale Bible Church in Chicago. In 1956, the little congregation moved to the suburb of Westchester where the Lord helped them plant the Westchester Bible Church. For the next 42 1/2 years, the thriving ministry at WBC became their life's work. Ruth put her Christian Education degree to work by organizing children's ministries and was a favorite teacher and story teller. In a captivating way she brought stories to life. Ruth's home was the site where for many years, her large extended family gathered and feasted on Christmas Day. Along with her gift of hospitality, for many years during periods of church growth and construction, space in her home was often shared with Sunday School classes. Bob and Ruth were blessed to travel the world. They both spoke at Bible Conferences, led many tours to Israel and visited missionaries in 19 countries. Ruth was a huge sports fan who loved her country and every politically conservative organization. After her husband's passing and to be near her daughter's family, Ruth moved to Michigan in 1999. Here she attended Mayfair Bible Church and was involved in numerous ministries from singing in the choir to organizing Caring Connection...a ministry to widows. Ruth will long be remembered for the warmth of her bright smile, the depth of her faith and sweet disposition that remained to her final day. Tributes are too numerous to mention of lives touched by her example and ministries. She was faithful in prayer, fiercely loyal and generous to her family and deeply loved all who knew her. Ruth is survived by her daughter, Peggy Stewart and son in law Dean; three grandchildren, Timothy (Angela) Stewart of Dayton, TN; Rachel Etheridge (Troy) of Flushing, MI; James (Abby) Stewart of Almont, MI; and fifteen beloved great grandchildren. A funeral service for Ruth will be held at Mayfair Bible Church - 5339 Pierson Rd., Flushing, MI on Saturday, September 17, 2022, at 11:00AM with a visitation one hour prior. Interment will be at Clarendon Hills Cemetery in Darien, Illinois. Fond memories and expressions of sympathy may be shared at www.ReigleFuneralHome.com for the Gray family.
See more See Less

In Memory Of Ruth Lois Gray