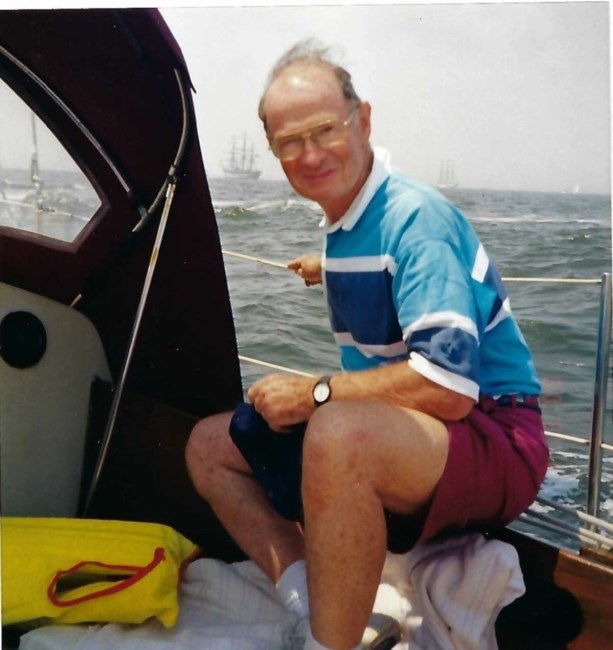 Stephen William Kann, 93, of Brooklyn Heights, passed away in New York on March 30th, 2020. Born in Frankfurt, Germany, he was the son of Arthur and Alice (Mayer) Kann. He lived in Bingen with his older twin sisters and parents. He attended school in England prior to coming to the U.S. He graduated from New Rochelle High School in 1943. He served in the U.S. Army during World War II and the Korean War. Serving for three and a half years, he was a First Lieutenant in the Corps of Engineers. Stationed in Germany, he supervised over forty men overseeing the location, condition and quantity of U.S. engineering equipment and supplies in Europe. He graduated from Bradley University in Peoria, Illinois in 1948 with a degree in mechanical engineering and pursued graduate studies at the University of Pittsburgh in industrial engineering and at New York University in magazine editing and production. He first worked as an Industrial Engineer and then as a Safety Engineer for the U.S. Steel Corporation in Pittsburgh, Pennsylvania, where he also wrote articles on engineering topics . In 1953, he joined Johnston International Publishing Corporation in Manhattan where he worked for 35 years as Editor and Publisher of numerous overseas trade magazines including Industrial World, Industrial World en Español, American Exporter Industrial, Export, Automobile International, Auto & Truck International, and Aftermarket International. After visiting more than 700 factories and industrial distributors in over 25 countries, he went on a 33-day trip, 21,000 mile industrial survey of South Africa and Kenya. For his report on this trip, he won the prestigious Jesse H. Neal Award for Editorial Excellence in 1967, an honor in specialized journalism and business media. At Johnston International Publishing Corporation, he became Group Publisher, Vice President of Sales, and Director. When Johnston International was sold, he continued to work for Hunter Publishing. He received numerous awards and honors, most notably the Overseas Automotive Council’s highest honor, the OAC Lifetime Achievement Award, in 2000. The inscription on the OAC Lifetime Achievement award reads “For his lifelong effort to promote the Overseas Automotive Council’s principles of friendly trade relationships and mutual cooperation among those engaged in international trade.” He became a member of OAC in 1977 and served on the board of directors for more than 12 years, as he was reelected over and over, and served on the marketing, overseas shows, program, and roster committees. He was President of the World Trade Writers Association, served on the Executive Board of the American Society of Business Press Editors, was Secretary-Treasurer of the International Industrial Marketing Club, was an Editorial Consultant for the Society for International Development, and was a judge for the New York Academy of Science in Public School Science Competition for many years. He also instituted a popular breakfast at The Automotive Show now called AAPEX. His world travel and explorations included Australia, Brazil, Colombia, Cuba, Europe, Hong Kong, Japan, Kenya, Mexico, New Zealand, Venezuela, Russia, China, Egypt and elsewhere. He was predeceased by his parents Alice and Arthur Kann and his sister Hanne McElheny. He is survived by his sister Ellen Pine. He is survived by his loving children James, Victoria and Elizabeth, their spouses, their mother and his best friend Patricia, eight grandchildren, and many nieces and nephews. Steve devoted his time to helping his children, playing with his grandchildren, sailing, skiing, hiking and biking. He made every moment more pleasant with his sense of humor, comforting words, humble demeanor, thoughtfulness, and loving kindness. He will be remembered for his willingness to help, his love for his family, and especially for the way he made everyone smile. He was a member of Plymouth Church in Brooklyn Heights for over 55 years. Contributions in his honor can be made to Plymouth Church in Brooklyn Heights at plymouthchurch.org. Fond memories and expressions of sympathy may be shared at www.sbjmemorialchapel.com for the Kann family.
See more See Less

In Memory Of Stephen Kann