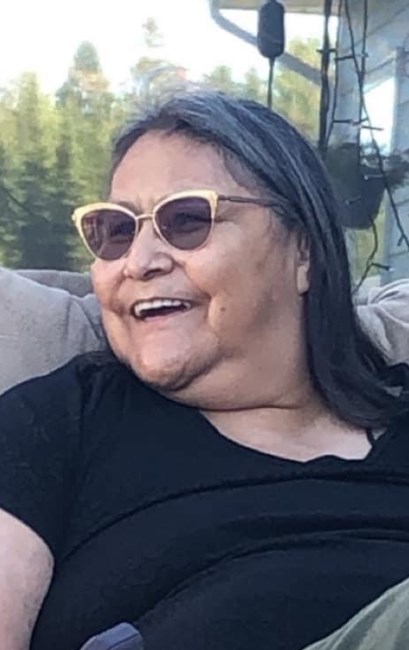 Ogimaa Giizhigook It is with great sadness that the family of Pamela Copenace announces her passing on Thursday, May 5, 2022 in Thunder Bay, Ontario. Pamela was born on June 6, 1959 in Emo, Ontario. She grew up in Onigaming First Nation and was proud to call it home. She was united in marriage to Gus Copenace on August 26, 1978 and was blessed with two boys, Gus Jr. “Mork” and Ricky. She loved to watch them play baseball and hockey. A tradition she carried on with her grandchildren. Pamela was an educator who worked hard to help the First Nation Communities. She worked with the Ontario Ministry to establish child care in the northern communities as well as working with special needs students in Onigaming First Nation. She enjoyed baseball, going for walks, attending Pow wows and traditional ceremonies. She also enjoyed nature photography and shared her talent with friends and family through social media. She will be greatly missed by her husband Gus; mother Corrine; grandchildren Latasha Copenace (Christian Peters), Nicholas Copenace and Ryan Copenace; siblings Lawrence (Brenda) Kelly, Harry (Judy) Kelly, James (Nancy) Kelly Jr., Susan Kelly, Dennis Mandamin (Donna), Lisa Kelly (Lawrence Tom), Amy Kelly, Janice Kelly (Terry Tom), Loretta Kelly (Joe); daughters-in-law Annie Boyd and Candace Kelly and dear friends Dr. Shiraz and Dr. Ruppenstein as well as many nieces and nephews to numerous to mention by name. Pamela was predeceased by her sons Gus Jr. “Mork” and Ricky; father James H. Kelly; and in-laws Flossie “Majig” and Edward Copenace Sr. A traditional wake will be held on Monday, May 9, 2022 at 3 p.m. at the Ojibways of Onigaming First Nation School. A traditional Funeral service will be held on Tuesday, May 10, 2022 at the Ojibways of Onigaming First Nation School with Elder Lawrence Henry officiating. Cremation will take place following the service. The pallbearers will be Miles Kelly, Christian Peters, Merle Kelly, Kyle Copenace, Brennen Kelly, Jonah Kelly, Jeff Copenace and Thomas Copenace Jr. The honourary pallbearers will be Mary-Ann Joseph, Diane Kelly, Jackie Windigo, Pat Greene, Jane Bishop, Justine Copenace-Bell, Fern Bruyere, Susan Kelly, Lisa Kelly, Amy Kelly, Janice Kelly and Loretta Kelly. The traditional singers will be Trevor Copenace, Charlie Kelly, Clancy Kelly, Rob Kelly, Junior Spruce, Little Joe, Jessie Kelly, Doug Sinclair, Joe Jack and Mr. Ron.
See more See Less

In Memory Of Pamela Copenace