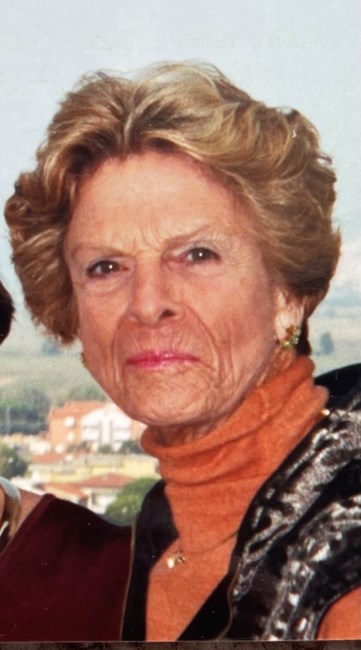 Margaret Boyle Caponegro November 24,1931 - May 12th, 2022 Margaret Boyle Caponegro, 90, of Colts Neck, NJ died peacefully surrounded by family members on May 12th in Fort Lauderdale, Florida. Margaret grew up in Atlanta, Georgia and was the daughter of William and Helen Lacy. Margaret, known to most as “Peggy” had the biggest heart and nothing made her more happy than being with her family. Affectionately known as Nan/Nanny by her grandchildren and “Old” Nan by her great grandsons. Peggy was lighthearted and warm and was always there to provide support, advice or just a simple laugh. Peggy was an avid golfer and enjoyed spending time out on the golf course, participating in many benefit tournaments. She was a former member of the Officers Club/Suneagles of Fort Monmouth and Wild Dunes Country Club in Isle of Palms, SC. Peggy enjoyed traveling and spending time at the beach, especially in Charleston, SC. Peggy was a member of St. Mary’s Roman Catholic Church in Colts Neck, NJ. Surviving are her daughter Lorri Burton and her husband John of Colts Neck, NJ; her son John V. Boyle Jr, of Fort Lauderdale, Fl; step-daughter Dr. Frances Caponegro Del Boca and her husband Dr. Robert Del Boca of Chicago, IL; stepson Michael Caponegro, Jr. and his wife Mary Anne of O’Fallon, IL. Grandchildren, Dr. John Burton of Pompano Beach, FL; Brian and Brianne Burton of Colts Neck, NJ; Caitlin Burton and fiance David Kunyz of West Long Branch, NJ; Step-granddaughter, Ramona Caponegro. Great grandchildren, Dylan and Luke Burton. Brother Jerome and Nona Lacy of Marietta, GA; sister Georganne Donnelly of Atlanta,GA. In addition to her parents, Margaret is predeceased by Colonel Michael Caponegro and her first husband John V. Boyle and her brothers William and Robert Lacy. Peggy Caponegro was a bright light, whose love and compassion knew no bounds. She has left an indelible mark on the lives she touched and will be missed forever. Interment will be private and a celebration of life will be held at a later date. In lieu of flowers donations may be made in honor of Peggy to St. Mary’s Roman Catholic Church in Colts Neck, NJ or the Alzheimer's Association. It can be a great comfort to a grieving person or family to hear that others thought highly of their loved one, too. If you knew and admired Margaret, be sure to let the family know by writing a few words in the "Memory" section of her obituary on the Kraeer - Fairchild Funeral Home website. www.KraeerFairchild.com
See more See Less

In Memory Of Margaret B Caponegro