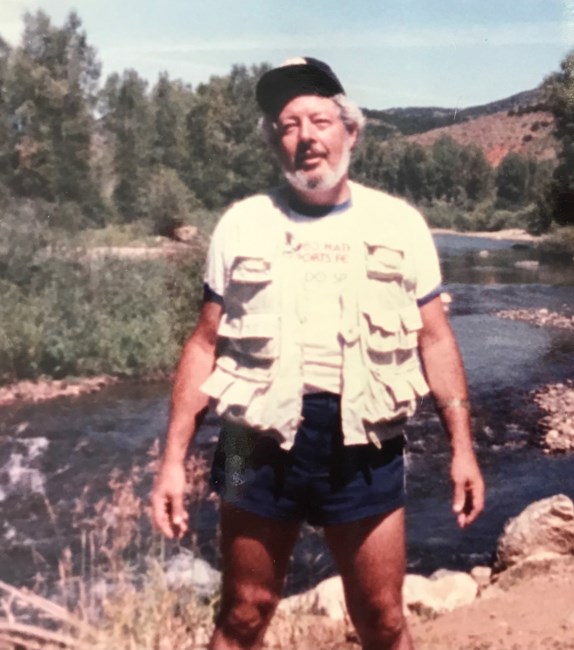 James “Jim” Jesmer Sr., 85, of Bullhead City, Arizona has passed away. James grew up in north Denver, CO where he attended North High School. He followed in his father’s footsteps and became a printer, eventually owning his own typesetting business. James was a well-known musician in the Denver area. He played upright bass and electric bass and was very involved in the local jazz scene. At the height of his music career, he was asked to join a famous band in Nashville and aspired to immerse himself in the music scene there and in New Orleans. Sadly, he suffered a stroke just days before leaving for Nashville, which stole his ability to play his instrument. Music was his absolute passion, and that passion was passed along to his family. He encouraged everyone to appreciate and utilize their talents, especially if music was involved. After he recovered enough from his stroke to travel, he went on a grand adventure traveling around the country in his RV. For many of the early years of this journey, he did not have a cell phone. Rather than sending letters to share his experiences (and let us know where he was), he would send cassette tapes to his family and friends telling of his recent adventures. And if you ever received one of those tapes from him, you know what a joy it was listening to his stories! Some of his favorite places during his travels were Port Aransas, TX, Lake Tahoe, NV, and Pismo Beach, CA. He traveled in his RVs for many years, visiting and living in various places before finally settling down in Bullhead City, Arizona. James was an accomplished angler. He loved to fish using his vast collection of fishing poles and magic fishing tricks. He truly enjoyed being outdoors and passed that passion on to his family as well. He was knowledgeable about every kind of sport and enjoyed being close to the Casino’s so he could apply his knowledge and place a bet on sports. When luck was on his side, he enjoyed sharing his winnings with his grandchildren. He also enjoyed learning all he could about history, playing solitaire, cooking and sharing a meal, watching a good movie, and was an avid car enthusiast. He loved his family, and always ended the conversation with “Love you madly!” James is preceded in death by his parents Ralph and Helen Jesmer, Siblings Russell Jesmer and Marjorie Skala (Jesmer), an infant son, and his trusty side kick, a Schnauzer named Pepper. Survivors include his brother Michael Jesmer, his children Julie (LeRoy) Gilbert, James Jesmer Jr., and Jay Jesmer. Grandchildren Justin Gilbert, Tyler (Emily) Gilbert, Kristen (Tim) Gilbert, Chanel (Sean) Hackley, and Deidra Jesmer. He is also survived by his five great-grandchildren, and numerous nieces and nephews. A gathering to celebrate his life will be announced at a later date. Donations can be made in his honor to your local school district’s music program, or your favorite charity.
See more See Less