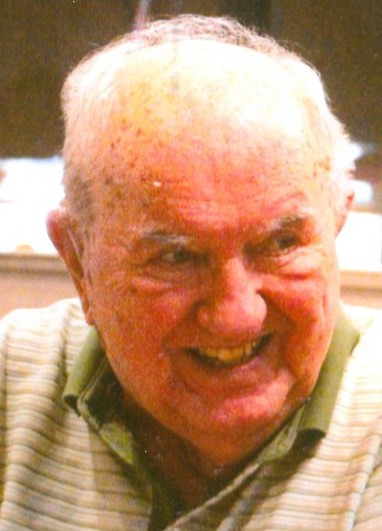 Clarence O. Molden was born in Milwaukee on March 13, 1928 to Otha and Marie Molden. He died on August 19 in Ft. Myers. Clarence spent 29 years as a Milwaukee police officer. Prior to joining the force, he met and married the love of his life, Delia Decesari. They married on July 8, 1950, and just celebrated their 70th anniversary in July. Susan, their only child, completed their family in 1951. The little family enjoyed many summer family road trips, visiting family and sight-seeing throughout the states. Clarence volunteered in many capacities at the churches where he was a member and enjoyed family camp with church friends. He also volunteered many hours with his daughter’s Girl Scout troop. In retirement, Clarence and Delia moved to Florida, where he enjoyed golfing regularly. Additionally, he enjoyed playing bocce (serving as the leagues president for eight years), and Delia convinced him that the two of them would love ballroom dancing. They were known for their enthusiastic jitterbug. While retired, Clarence also devoted time to teaching defensive driving courses for AARP. Not only was he proud of his 19 years of AARP affiliation, he was also proud of earning his Associate Degree. Survivors include his wife Delia, his daughter, numerous nieces and nephews, friends and one brother-in law. Clarence was preceded in death by his parents and his sisters and their husbands: Anna (Gilbert), Betty (Robert), Elaine and Audrey. For family and close friends, a celebration of Clarence’s life will be held at a later date in Milwaukee. Clarence’s cremains will rest at Milwaukee’s Mt. Olivet Cemetery. Hope Hospice and Arden Courts Memory Care provided exemplary care for Clarence and his family.
See more See Less

In Memory Of Clarence Otha MOLDEN