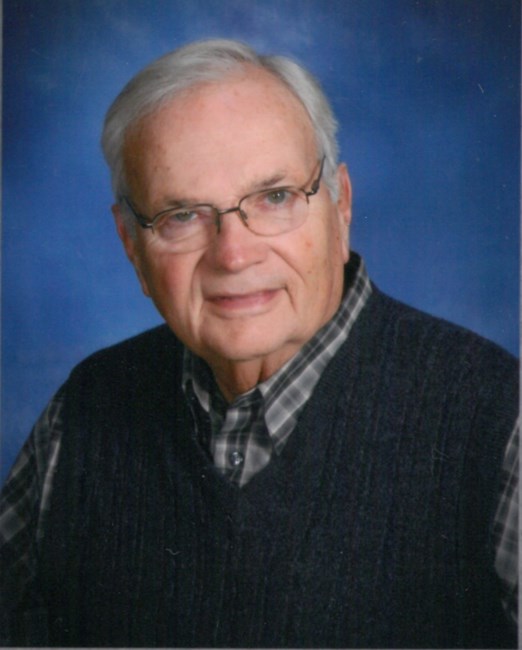 Donald Theodore “Ted” Hains entered fully into the presence of the Lord on Tuesday, January 24, 2023, he was 90 years old. Ted passed away at home in Fort Myers after an extended illness. A visitation for Ted will be held Saturday, January 28, 2023 from 11:00 AM to 1:00 PM at Hodges Funeral Home at Lee Memorial Park, 12777 State Road 82, Fort Myers, FL 33913, followed by a celebration of life from 1:00 PM to 1:30 PM. To watch the livestream of the service via Zoom please join us by clicking the link below: https://us02web.zoom.us/j/88445378867?pwd=cllNaS9tMk5LSUg0ZnpTUitMOXJkUT09 Ted was born December 13, 1932 to Frank and Helen Hains in Sterling, IL. Ted was the oldest of three children, Donald, Joyce and Roger. Ted grew up in Rock Island, IL where he graduated from Rock Island High School in 1951. In February of 1952, Ted joined the Air Force during the Korean War, he was stationed at Scott Air Force Base in Illinois and then transferred to Kadena Air Force Base in Okinawa, Japan where he served until April of 1955. Ted received the National Defense Service Medal, the Korean Service Medal, the U.N. Service Medal, a Good Conduct Medal and 2 medals from the South Korean Government. During Ted’s time in the service, he found his love for photography, he spent his off hours capturing beautiful black and white photos of the people and beautiful landscape of Korea. After he returned stateside, Ted attended the Ray Vogue School of Photography in Chicago, IL. While in school, his fiancé, Elaine Swanson and Ted’s parents prepared a photo studio in Rock Island that opened in 1955, Hains Photo Studio. In 1956, Ted married the love of his life Elaine Swanson, together they operated their studio and raised a family. Ted received many professional awards over his tenure as a photographer, he was the President of the Professional Photographers Association in Illinois, President of the Twin Cities Pro Photographers and life member as well as board member of the Professional Photographers of America. Ted earned his Master of Photography as well as his Master’s Craftsman. Ted was the yearbook photographer for Rock Island High School taking many Seniors pictures and was also known as the wedding photographer in the Quad Cities. In 1981, God called Ted and Elaine into the mission field, they left for Venezuela with 2 of their younger children as missionaries. After returning home, they went to Minneapolis where Ted worked for the Evangelical Free Church of America’s home office. Ted left the Free church to pick up his camera once again, his first assignment was to fly into rural Alaska taking school children’s pictures. Afterwards, Ted and Elaine opened a portrait studio in Burnsville, MN. They created a beautiful backyard space full of gardens and even a waterfall to photograph families and high school students. Ted’s professional photography career spanned over 40 years. His artistic works hang on the walls of homes all over the Midwest. Ted was a true artist and after he retired, continued his art in the form of woodworking, he created many bowls, tables and rockers over the years winning multiple awards for his handiwork. Ted was an active member in the SW Florida Woodturner’s Association. As Ted grew older, he would tell you that although he was accomplished in his professional career, the only thing that really matters in life is a relationship with Jesus Christ. After he retired, he joined the Pocket Testament League and has distributed thousands of the Gospel of John to those that need to hear about Jesus. He served on the board of the nonprofit “iWork4Him” to help reach people in the workplace for Christ and recognize it as their mission field, Ted was instrumental in creating “iRetire4Him” a movement to bring retirees off the sidelines and back into the game. Ted was an amazing storyteller and is a published author, his writings include “Uncle Ted’s Bathroom Reader and life stories included in the iWork4Him Trilogy Series. If you had the privilege of meeting Ted Hains, you know that he had a heart of gold and a huge smile that would leave a lasting impression on you. He cared deeply for people and wanted to make sure everyone he met would have the opportunity to hear that they were loved by God. Ted was involved in his churches: First Baptist of Bemidji, MN and McGregor Baptist in Fort Myers, FL. Ted loved his cabin on Cass Lake and was happiest when he was on his pontoon, in his woodshop or with his neighbors, friends and family. Ted is survived by his wife of 66 years Elaine Hains, his sister Joyce (Jack) Wood of Escondido, CA, his brother Roger (Dee) Hains of Bettendorf, IA. Children Diana (John) Pratt of Punta Gorda, FL; Don (Tracy) Hains of Burnsville, MN.; Mary (Gary) Gesnaldo of Fort Myers, FL and Martha (Jim) Brangenberg of Marionville, MO. Grandchildren Brandon (Jennifer) Pratt North Liberty, IA; Blake (Katt) Pratt Walker, MN; Ryan (Kerrie) Schwertman Shakopee, MN; Katelynn (Jacob) Fast Roseville, MN; Lindsay (Jared) Stump Fort Wayne, IN; Tanner Thompson Fort Wayne, IN; Joshua (Amelia) Brangenberg Jacksonville, FL; Sarah (Caleb) Norris Marionville, MO. Great Grandchildren, Leandro, Christiano, Enzo and William Pratt; Addison, Jack and Andrew Schwertman; Kennedy, Henry, Teddy and Saddie Fast; Ellieanna and Elijah Stump; Noah, Scarlet, Ada and Lucy Brangenberg; 2 additional great grandchildren will be born in 2023. Many nieces and nephews which all have been blessed by Ted Hains. The family would like to thank Hope Hospice and Home Instead for their kind services during his illness, please consider making a donation to Hope Hospice of Fort Myers, FL.
See more See Less

In Memory Of Donald "Ted" Hains