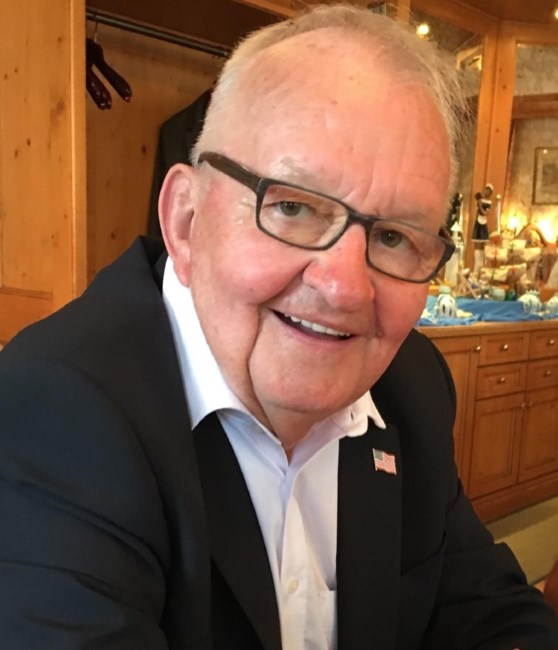 Guenter Ahrens, Age 85 of Fort Myers, Florida, passed away peacefully on January 16th 2023. On April 9, 1937 the sun rose over the small village of Wolkenwehe, Germany. On Monday January 16th it set over Fort Myers, Florida concluding the amazing life and journey of our father Guenter Ahrens. Guenter was born and raised in Northern Germany the son of Maximillian and Henny Ahrens along with 8 brothers and sisters. He attended school in Lubeck Germany and became a Master Pastry chef. In 1963 he immigrated to the United States along with his wife Gerda and son Siggi, choosing to practice his craft at Nelson’s Bakery in Malden, Mass. In 1965 shorty after the arrival of his son, Ingo, he purchased Marie’s Cake Shop in Cambridge Mass. Where for 12 years he provided baked goods for Harvard and Radcliffe Universities as well as a bustling retail trade. In 1975 shortly after purchasing a summer home in Cape Elizabeth Maine He decided it was time to make a permanent move to Maine and subsequently purchased Lekousi’s Bakery on Congress St. as well as Leadbetter’s Bakery on Brighton Ave., which was later renamed Guenter’s Bakery. Upon the sale of the bakeries and after a brief retirement Guenter went on to work for Amato’s Bakery of Westbrook for over 20 years. He Resided in Scarborough, Maine with his partner of 30 plus years Cora Collins until 2018 at which time he became a snowbird and spent his winters in Fort Myers, Florida with his 2 sons. He was a member of several organizations to include Lions Club International, Benevolent and Protective Order of Elks, Loyal Order of Moose as well as a member and past President of the Massachusetts Retail Bakers Association. He will be remembered for always saying exactly what was on his mind whether you wanted to hear it or not, having a story to tell or a joke (not always appropriate) and his often edgy sense of humor, until the end he was a devoted follower of politics and had an amazing love for his adopted country the United States. He is Survived by his sons Siggi and Ingo of Fort Myers, Fl., His life partner Cora Collins of Scarborough, Me., Sisters Hannelore Kuhl and Wiebke Adolf of Bad Oldesloe Germany, as well as many nieces, nephews, in laws and countless friends. There will be no services held, A Celebration of Life will be held in the near future in Fort Myers, Fl. Guenter wir leben dich! Father, Friend & Mentor Fond memories and expressions of sympathy may be shared at www.kiserfh.com for the Ahrens family.
See more See Less

In Memory Of Guenter Ahrens