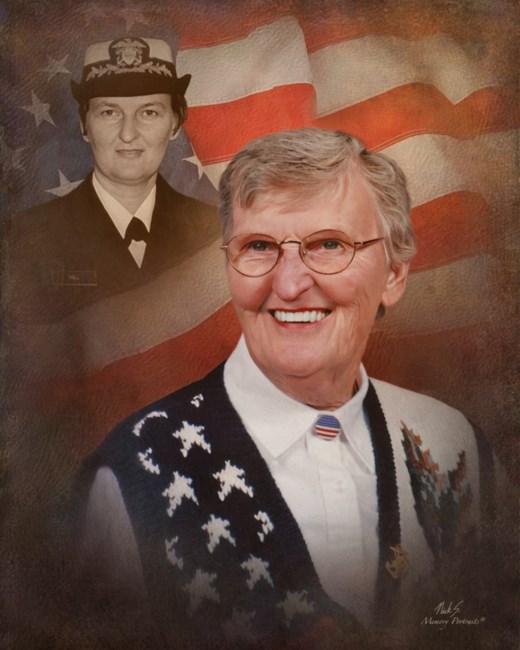 Gretchen S. Hill was born on 21 Sept. 1928 in Coal Hill Arkansas to Herschel and Elizabeth Quaile Hill, the youngest of ten children. She graduated Hartman High School, attended Arkansas Tech, changing to Charity Hospital School of Nursing in New Orleans. Upon graduation, Gretchen was commissioned an Ensign in the U.S. Navy. She enjoyed a twenty year career, serving 13 duty stations, including Guam, Japan and Alaska, surviving the 1964 Kodiak, Alaska earthquake and tidal wave. She advanced her education at the University of Michigan with a CRNA degree. After retiring from the Navy as a CDR, she returned to Arkansas where she worked as a nurse anesthetist at several rural hospitals for 17 years, retiring in 1987. Gretchen enjoyed volunteering for several organizations for many more years. Gretchen died peacefully at Methodist Village on 19 Jan. 2023 at 94 years. She was proceeded in death by her parents and five sisters and four brothers. She is survived by 13 nieces and nephews, many great nieces and nephews, a very special and dear friend, Marjorie Boer, along with numerous other friends. The memory of Gretchen’s love, wit, humor and generosity are treasures we will carry with us always. She was a member of First Presbyterian Church. Visitation will be from 4:00 to 6:00 P.M. Sunday, January 22nd at the Edwards Funeral Home. Funeral services and burial with military honors will be Monday, January 23rd at 10:00 am at the National Cemetery, Fort Smith. A memorial service will follow at First Presbyterian Church. Arrangements are under the direction of Edwards Funeral Home of Fort Smith. Pallbearers will be nephews Dean Hill, Dan Hill, Doug Hill, Wade Hill, Travis Hill and Mike Clotfelter. Many thanks to the caring, loving staff at Methodist Village Senior Living. In lieu of flowers, memorial contributions may be made to Christmas Honors, P.O. Box 10696, Fort Smith, AR 72917 or Wounded Warrior Project, P.O. Box 758516, Topeka, KS 66675 or go to www.woundedwarriorproject.org
See more See Less

In Memory Of Gretchen S. Hill