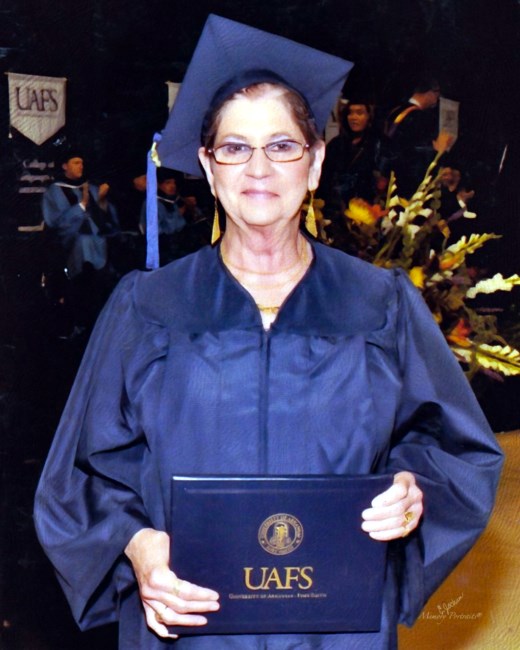 Sharla Faye Goff, 74, of Barling, passed away on Tuesday, September 21, 2021. She was born on August 18, 1947 to the late Marting and Rose Anna Delawder. She formerly worked for Spahn Cabinets for 15 years and then Rheem Manufacturing. After Sharla retired, she went to college at UFAS, graduating in 2013 with a degree in education. She then came out of retirement and worked as a teacher in the Fort Smith Public School System. Sharla attended The House of Restoration and was formerly a member at Harvest Time Church. She was a member of the UFAS Alumni Association. In addition to her parents, she is preceded in death by her first husband, Larry Rice and her late husband, Lloyd Lee Goff; three brothers, David, Robert and Joseph Delawder. Funeral Service will be 1:00 P.M. Wednesday at Edwards Funeral Home Chapel, interment will be at Hartford Memorial Park in Hartford, AR. Arrangements are under the direction of Edwards Funeral Home in Fort Smith. She is survived by her daughter, Robin Davis (William) of Hartford; her son, Larry Christopher Rice of Barling; five sisters, Hope Harris of Fort Smith, Aleta Matlock of Pocola, Edna Delawder of Monroe, LA, Mary Hemphill of Spiro and Rachel Douglas of Rudy; a brother, Paul Delawder of Mansfield; six grandchildren, Samuel Jordan Humphrey (Dustie) of Howe, OK, Chloe Madison Humphrey of Trinidad, CO, Ivy Gantt (Dakota) of Van Buren, Victoria Johnson of West Palm Beach, FL, Brandan Parkman of Bossier City, LA and Robert Collins (Destany) of Hartford. She is also survived by a special friend, Stephanie Faye Pelow of Newport, MI. Family will greet friends from 5:00 P.M. to 7:00 P.M. Tuesday at the funeral home. In lieu of flowers, memorial contributions may be made to The House of Restoration, 2201 South 46th Street, Fort Smith, AR 72903, or visit www.thehouseofrestoration.com

In Memory Of Sharla Faye Goff