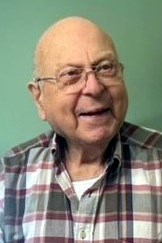 Adolph B. Brateman, 91, passed away on Tuesday, September 20, 2022, at his home in Fort Wayne, Indiana, surrounded by his family. He was born May 21, 1931 in Fort Wayne, to the late Samuel and Pauline Brateman. Adolph graduated from South Side High School in 1951. He proudly served in the Marines during the Korean Conflict. His father started Brateman Brothers in 1919, where Adolph worked most of his life. Adolph was the owner of the business for over 70 years. Brateman’s Uniforms is still family owned today after 103 years, serving Fort Wayne and the surrounding communities. They are known for supplying uniforms for all types of service industries, including fire, police, sheriff's departments, and apparel for tradesmen. Adolph loved his job and the clients he helped during his long and dedicated career. He is survived by his loving wife of 54 years, Adrienne Brateman; sons, Michael Brateman, Paul and Molly Brateman; and a granddaughter, Samara Brateman, all of Fort Wayne. In addition to his parents, Adolph was preceded in death by his brother, Irving Brateman. The family would like to thank Cindy Cristo of Payne, OH, for her dedicated and faithful care of Adolph during the last few years. A funeral service to honor Adolph's life and legacy will be held at 12:30 pm on Thursday, September 22, 2022, at D.O. McComb & Sons Covington Knolls Funeral Home, 8325 Covington Road, Fort Wayne, with a visitation beginning at 10:00 am, until time of the service. Committal prayers will be held at 10:30 am on Friday, September 23, 2022, at Westlawn Cemetery, Norridge, Illinois, where he will be laid to rest. In lieu of flowers, memorial donations in his honor may be directed to Humane Fort Wayne. Fond memories and expressions of sympathy for Adolph's family may be shared at www.McCombandSons.com.
See more See Less

In Memory Of Adolph B. Brateman