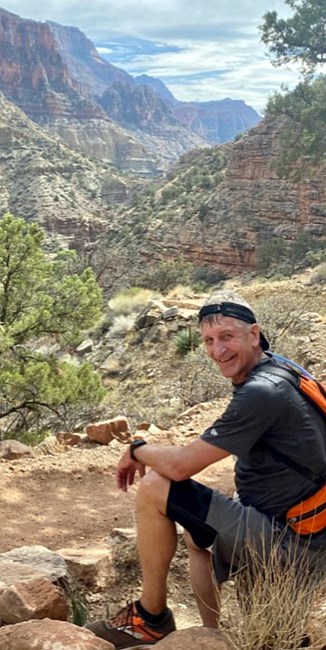 Brian Ray Chambers, 63, passed away Monday, September 19, 2022, at his home in Fort Wayne, Indiana, surrounded by his family. He was born May 2, 1959, in Lansing, Michigan, the son of the late Ray and Doris (Carpenter) Chambers. Brian graduated from Haslett High School in 1977 and earned his Bachelor's Degree in Chemistry from Kalamazoo College. He was employed by the Harry S. Peterson Co of Auburn, MI, Nova Gard of Cleveland, OH, Evonik of Richmond, VA, and Star Technology of Waterloo, IN. Running, painting, gardening and cooking—these were Brian's pleasures. Running, however, was his passion. Marathons, half marathons, tough mudders, Spartan races, you name it, he was up for it. Vacations were often planned around marathons. One of his biggest challenges was running rim-to-rim in the Grand Canyon. As he was just weeks away from his second run in the canyon, he was talking about a couple upcoming marathons. Brian always wanted to make a difference, to make things better for others. He is survived by his wife, Joy Chambers; daughter, Jami Chambers; grandson, Nicholas Chambers all of Fort Wayne, IN; step-mother, Janice Chambers of East Tawas, MI; nephew, Alan (Jen) Derry of Williamston, MI; Niece, Jennifer (Aaron) Nim of Haslett, MI; step-brothers, Justin (Wendy) Prestrue of Toledo, OH, Joel (Holly) Prestrue of East Tawas, MI, Trevor Prestrue of St. Louis, MO; sister-in-law Fern (Roland) Coats of Spring Lake, MI; great-niece, Kayla Derry; great-nephews, Caleb Derry, Jaskson Prestrue, and Liam Prestrue; aunts, uncles and cousins. In addition to his parents, Brian was preceded in death by his sister, Dorae Derry. A private memorial service to honor Brian's life and legacy will be held in Williamston, Michigan. Arrangements by D.O. McComb & Sons Pine Valley Park Funeral Home, 1320 East Dupont Road, Fort Wayne, IN. Memorial donations in his honor may be directed to Run2Revive (a non-profit for Alzheimer’s and ALS research) by visiting this link: https://give.run2revive.org/fundraiser/brian-chambers Fond memories and expressions of sympathy for Brian's family may be shared at www.McCombandSons.com.
See more See Less

In Memory Of Brian Ray Chambers