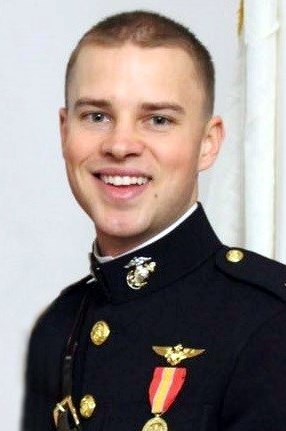 Captain Matthew J. Tomkiewicz, United States Marine Corps, 27 (June 20, 1994), of Fort Wayne, IN passed away in Norway during NATO Cold Response training on Saturday, March 19, 2022. He was born June 20, 1994, a son of Tracy A. and Lisa M. (DeRoche) Tomkiewicz. Matthew was a 2012 graduate of Homestead High School (Fort Wayne, IN). Following graduation, he continued studies at Purdue University (West Lafayette, IN) where he was involved with the Alpha Tau Omega fraternity and graduated in 2016 with a degree in Aviation from the Purdue Polytechnic Institute. Matthew joined the Marine Corps in 2015 and served as an MV-22B Osprey pilot with the Marine Medium Tiltrotor Squadron 261, Marine Aircraft Group 26, 2nd Marine Aircraft Wing stationed on Marine Corps Air Station New River, North Carolina. His decorations include the National Defense Service Medal, Global War on Terrorism Service Medal and Sea Service Deployment Ribbon. Matthew was selfless, patient and calm. He was his wife’s best friend, protector and peace. He lit up every room with smiles and laughter – bringing humor with his quick wit. He was humble, dedicated, and proud to serve his country. He is survived by his wife, Lauren K. (Mantica) Tomkiewicz; parents, Tracy A. and Lisa M. (DeRoche) Tomkiewicz; his beloved goldendoodle son, Kevin Bacon, and new puppy, Willard Love; brother, Michael A. Tomkiewicz; sister, Emily M. Tomkiewicz; grandmothers, Rae Marie (Stromberg) Tomkiewicz, and Janet M. (Pryor) DeRoche; and many aunts, uncles, and cousins. He was preceded in death by his grandfathers, James E. Tomkiewicz, and George M. DeRoche. A Celebration of Matthew’s Life will be held at 4:30pm on April 3, 2022, at Parkview Field, 1301 Ewing Street, Fort Wayne, with calling from 1:30pm until time of service. The Celebration of Matthew’s Life is for family and friends and is not open to the public. Memorial donations in his honor may be directed to the Matthew J. Tomkiewicz Memorial Fund. Details about the Matthew J. Tomkiewicz Memorial Fund can be found at www.mjtmemorial.com. Fond memories and expressions of sympathy for Matthew's family may be shared at www.McCombandSons.com All flower deliveries to Parkview Field, 1301 Ewing Street, Fort Wayne, on Sunday, April 3, 2022.
See more See Less

Calling for Family and Friends

A Celebration of Matthew's Life for Family and Friends