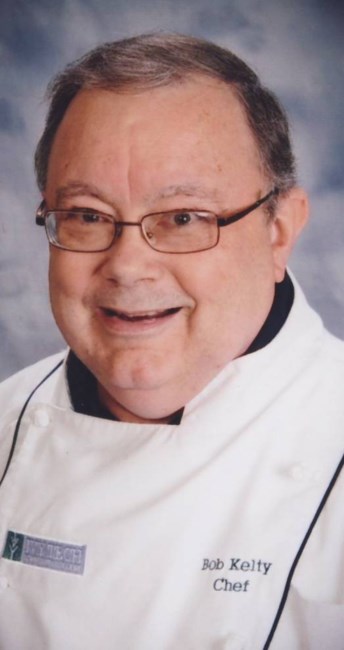 Robert F. Kelty, 64, died in his home. He was surrounded by his loving family when the Lord called Bob to Him. Born in New Haven, IN, on April 14, 1947, he graduated with Bachelor’s degree from the University of St. Francis, and two Master’s degrees from Indiana University. He was in progress for a Ph.D. from Indiana State University and all of his degrees were in Education or Educational Administration. Bob served the Dioceses of Ft. Wayne/South Bend for 25 years as a teacher and administrator at St. Joseph’s on Brooklyn Ave., St. John’s in New Haven, St. Therese in Waynedale, St. John’s in Ft. Wayne, and St. Aloysius’ in Yoder, where he was awarded the Principal’s Light of Learning Award. He also served several years as the treasurer of the principals’ association. Bob was also an American Culinary Federation certified culinary educator, one of only a few in the state of Indiana. Chef Bob served as adjunct faculty at Ivy Tech Community College in the Culinary Arts department beginning in 1985, and in 2000, accepted the position as Dean of the School of Education and Public and Social Services at Ivy Tech, overseeing the programs of Culinary Arts, Library Technical Assistant, Criminal Justice, Public Safety/Fire Science, Human Services, Paralegal Studies, Elementary Education and Early Childhood Education. He was involved on the institution of the Educational Partners’ Group to design the curriculum for the Northeast Public Safety Academy and the institution of the Crossroads program, a partnership between Ivy Tech and IPFW to assist students in achieving a Bachelor’s degree. Bob touched the lives of his students through his mentoring in the U.S. Department of Education TRiO program. He retired from this position after 11 years. Bob also served as assistant scholarship chair for the Hispanic Chamber of Commerce. He was a judge at the annual Gingerbread House Festival at the History Center. He was a First Degree Knights of Columbus. Also, he was treasurer for the Winchester Ridge Neighborhood Association. Bob’s passions for life were teaching, learning, baking, chocolate and his granddaughters. He remembered by his students as being full wisdom and epic one liners, as well as being easy to get off subject. Preceding him in death are his parents, Edward and Loretta (Putman) Kelty, his father-in-law Marvin Landin, and his twin sons Geoff and David. He is survived by his loving wife and partner Marvene (Landin); his children, Greg and his wife Christine, Rebecca, Geoffrey and Mary Beth; his granddaughters, Jordan and Lyla; his mother-in-law Betty (Herber) Landin; and his siblings, Louise (Steven) Hartman, Joseph (Ellen), Julie(Ron) Weaver, James, Dr. Richard (Sandra), Mary Ellen (Daniel) Granahan, Laura (Edward) Scherschel , Daniel, John (Christine), David, Dr. Gerald (Sue), and Stephen; nieces, nephews and godchildren. Mass of Christian Burial is 10:30am Friday at St. Jude’s Catholic Church on State Blvd. and Randallia St. An open viewing will precede the funeral Mass one hour prior. The Mass will be officiated by Fr. Tom Shoemaker, Fr. Dan Durkin and Fr. Glenn Kohrman. Visitation is 1-4 and 6-9 pm Thursday at Klaehn, Fahl and Melton, Winchester Rd. Chapel, 6424 Winchester Rd. Chapel. Burial in Catholic Cemetery. Memorials are to Masses at Sacred Heart and St. Jude Catholic Churches, Visiting Nurse and Hospice, CaringBridge.org, and the Robert F. Kelty Scholarship fund for Culinary Foreign Study. www.klaehnfahlmeltonfunerals.com

In Memory Of Robert F. Kelty