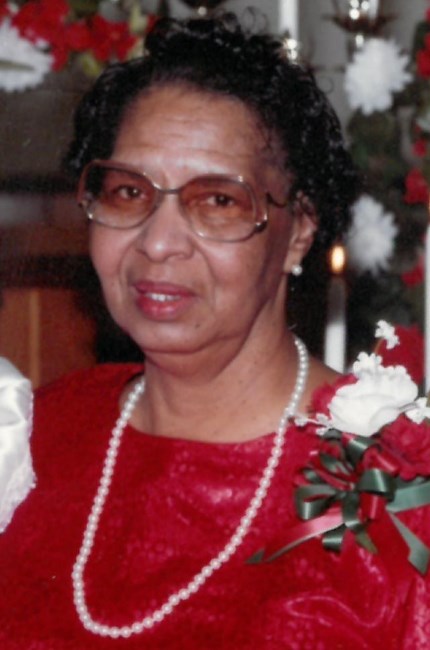 Mrs. Doris Faye Simpson Henderson was born on November 19, 1928, to Mr. James Frank Simpson and Mrs. Lottie Fuller Simpson in Fort Worth, Texas. At a young age, she joined St. Andrews United Methodist Church and later became a member of Morningside United Methodist Church. She attended I.M. Terrell High School and Wiley College. She was employed by Lee Optical as an Optometrist Assistant for many years. Doris was also employed with the Fort Worth Independent School District as a Special Education Instructional Aide until her retirement. Schools included Como Elementary and Greenbriar Elementary. Doris married Billie Henderson on August 29, 1954 in Fort Worth, Texas and to this union a daughter was born, Marla Y. Henderson. She loved and praised the Lord in her own quiet way. She was an amazing mother and grandmother who loved her family. Doris was a member of The Heroines of Jericho and she was a respected member of the Texas Retired Teachers Association. Doris was preceded in death by her parents, James Frank and Lottie Simpson, her husband, Billie Henderson, her brothers, Theophilus Simpson and James Harry Simpson, and her sisters: Wealthia L. Foreman, Berdie “Boots” Hilliard, Frankie Mae Glenn, and Arcola “Cola” Williams. Those left to cherish her memories most are: Her Daughter: Marla Henderson-Porter (Steve), Fort Worth, Texas; Two Grandsons: Michael Porter and Matthew Porter, Fort Worth, Texas; Bonus Daughters: Evelyn Sheppard, Las Vegas, Nevada; and Elaine Kibby, Katy, Texas; Two Sisters-In-Law: Lynda Simpson, Fort Worth, Texas; Mary Louise Phillips, Spencer, Oklahoma; One Brother-In-Law: Adam Henderson (Rosie), Dallas, Texas; A host of nieces, nephews, cousins, and lifelong friends. A special thank you to her adopted daughters: Elder Katheryn Cooper, Kennedale, Texas; Pam Freeman-Conway, Cedar Hill, Texas; Gina Barksdale, Fort Worth, Texas; Madeline Bell-Peek, Arlington, Texas; and Pam Watson, Fort Worth, Texas.
See more See Less

In Memory Of Doris Faye Henderson