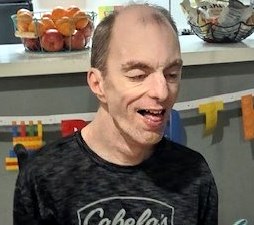 Stephen Nathaniel Hammonds—He Taught US HOW TO LOVE Stephen was born January 14, 1982, in Fort Worth Texas. It was apparent from birth that Stephen would be a special son to David and Jeanette Hammonds. Throughout his life he faced many challenges and endured many surgeries, but he was a fighter and always surprised the doctors. From 6 months to 4 years old, he attended Helping Hand Development Center in Irving. Then, he was a student in Keller ISD where he had several wonderful teachers and teacher aides. He graduated from Fossil Ridge High School in 2004. Stephen attended First United Methodist Church for the first 19 years of his life. He loved music—especially Christian children’s music. Through the years, he often helped his parents as they taught Texas Hunter Education classes and volunteered at TPWD events. He joined his parents on many campouts through the years and sometimes when they went hunting he would sit in the tent blind. Occasionally, he would tag along on Boy Scout campouts with his dad. He even repelled the cliffs at Mineral Wells State Park one time with the help of one of the dads. Stephen loved to go in boats and swimming. Stephen lived with David and Jeanette until he was 30 years old after which he lived in a group home in Fort Worth. There he achieved a new level of independence. He was a happy resident of the group home and he always giggled as we approached the group home after an outing. Stephen had a joyful spirit and a kind heart. He touched the lives of many people who otherwise might not have interacted with a special needs person. Stephen never met anyone he didn’t like. He always ready with a big hug. He had a sweet giggle and a wonderful cackle when he thought something was funny. He was the very essence of the scripture “God is Love” (1 John 4:8). He passed away July 29, 2022, in Fort Worth, TX, after a very brief illness. He will be missed. He is in Heaven now. We will see him again, in a little while (I Thess 4:13-17). The family request in lieu of flowers that a donation be made to St. Jude’s Children’s Hospital in his name. (262 Danny Thomas Place, Memphis, TN 38105) Memorial donations and gifts - St. Jude Children’s Research Hospital (stjude.org). If you wish to send flowers, please make them deliverable to the funeral home. Stephen was preceded in death by his grandparents, Fred and Nancy Hammonds, and Joy Marriott, his aunt Linda, and uncles Kenneth Hammonds, William Hammonds, and Jimmy Hammonds. He is survived by his parents David and Jeanette Hammonds, his brother Joseph Hammonds, and his aunt Debbie Laudner and her family.
See more See Less

In Memory Of Stephen N. Hammonds