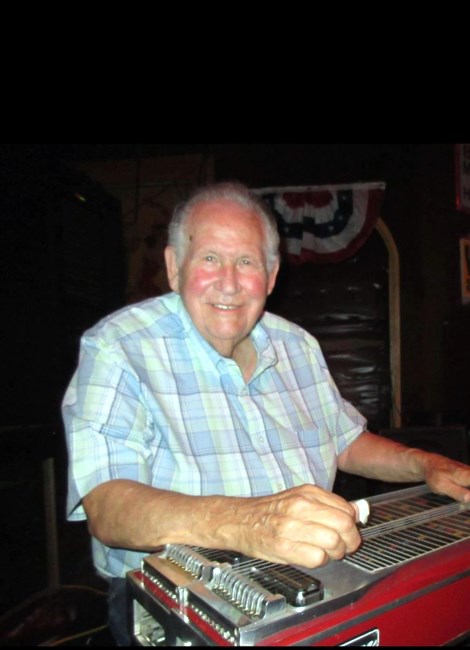 Ray enthusiastically embraced life and was a friend to everyone he encountered during his remarkable journey. His love of country music, the steel guitar, radio broadcasting, his friends and fans, and home cooking is renowned. Best defined as a steel guitar lover, player, promoter, devotee, and historian, Ray shared his love for the instrument worldwide. It all started in the 1930s when his father purchased for him a Sears, Roebuck and Co. white Silvertone steel guitar and amp. After moving to Franklin, Ohio, in the 1940s, attending Franklin High School, and serving in the Navy during WWII, he continued to foster his passion for country music launching the first U.S. steel guitar club in the 1950s, appearing on country music television programs throughout the ‘50s and ‘60s, and making seven USO tours throughout Japan, Korea, Newfoundland, Greenland, and Alaska which included entertainment icons Roy Acuff and Bob Hope. Throughout the 1970s, he toured the nation with Steve Lake and The Swingmasters backing up illustrious artists such as Connie Smith, The Statler Brothers, Crystal Gayle, Loretta Lynn, Lorne Greene, and members of the Hee Haw cast and Lawrence Welk Show. Ray toured the U.S. and Europe in 1983-84 with Grand Ole Opry star Boxcar Willie making twenty-six Opry appearances. Beginning in 1989, he was a member of the house band at Renfro Valley (Kentucky), the longest running radio show in the country, enjoying a ten-year run. Starting in June 1998, Ray became a beloved weekend personality on the Real Roots Radio network engaging listeners around the globe via his weekly live radio show.

The family will receive friends 5:00 p.m.-8:00 p.m. on Monday, January 3, 2022, at the Anderson Funeral Home, 1357 East Second Street, Franklin. Funeral services will take place at 2:00 p.m. on Tuesday, January 4, 2022, at the Anderson Funeral Home with Pastor David Zornes officiating and burial will be in Woodhill Cemetery. The Howards would like to thank the Steve, Gary, and Stephen Lake families and the staff and loyal listeners of Real Roots Radio.

Fond memories and expressions of sympathy may be shared at www.andersonfunerals-franklin.com for the Howard family.