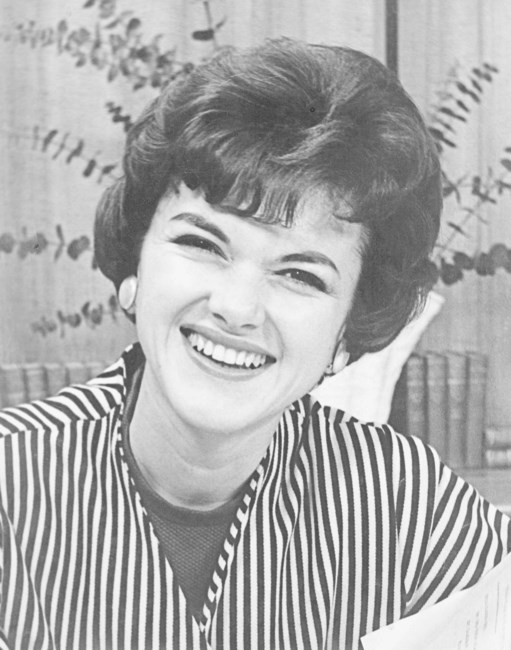 On February 4 at the age of 89, Glenna Jeanne Smith joined her beloved husband, in heaven. As her physician correctly said, it feels like the end of an era. All who knew Glenna bear witness to her indomitable spirit. There is no greater testament to her strength and courage than in her triumph over countless grave physical setbacks. And no greater example of the restorative power of the human spirit and God’s grace. Born February 19, 1930 in the city of San Francisco to, Glen and Enid Hurst. In 1934, the family returned to southern Oregon. While attending the University of Oregon, Glenna met the love of her life Gerald Smith. They married on August 4th in 1951. During that time she was a successful actress, with no small amount of acclaim. Assuming her stage name, “Glenna Page” she would star in over 2000 live commercials, be voted Best Freelance Artist for 1957, and as noted by Variety magazine as “the #1 lady in Northwest television”. She also starred in 23 television shows, including the 90 minute daily talk show, “The Glenna Page Show” on KATU Portland. Glenna was a professional member of AFTRA and Actor’s Equity. She took her last professional bow as her two children, Michelle Elizabeth (1963) and Michael Joseph (1964) made her family complete. In the 1976, Glenna began working as an Educational Aide at Monroe Elementary in Fresno County where her children attended school. Subsequently she worked as a Substance Abuse Counselor for Kings County, and Dean of Students at Westlands College in Fresno. Ultimately, she returned to her university degree in Speech Pathology. Glenna updated her credential and began her “second career” as a Speech Therapist. Her work meaningfully helped many kids in Mendota, Oro Loma, and other points west. In retirement, she loved spoiling grandkids, building her English Garden and becoming a part of the Newman Center at Fresno State. The grandkids she doted on weren’t always her own. She was happy to share her green thumb. The culinary skill was legendary. No better Yorkshire pudding, cheesecake or Christmas cookies can be found. The Newman Center gratified her spirit, particularly feeding hungry college kids with a delicious homemade meal. In 2009, Glenna committed to living the Gospel life in the way of St. Francis of Assisi and became a member of the Order of Secular Franciscans. She had a meaningful life, and she will live on in the hearts of all who knew her. At the end, peacefully, with grace and dignity, our Father called her home. Her suffering is over. Over the course of the last fifteen years, she overcame every challenge placed before her. Mercifully, there will be no more worn out joints, no more chronic pain, and no more struggling to complete her crossword puzzles. In ink. Glenna was preceded in death by Gerald Joseph Smith (1993), and her parents Glen Francis Hurst (1982) and Enid Irene Hurst (1999). She is survived by her son Michael, daughter-in-law Lisa, daughter Michelle Power, grandchildren Kelsey Page Smith, Nathan Smith, Jacqueline Cope, Joshua Power, Amanda MacInnis, Craig Meredith, Chip Meredith, and Stephen Meredith, her great grandson Joshua Cope, and great granddaughter June MacInnis.
See more See Less

In Memory Of Glenna Jeanne Smith

Recitation of the Rosary will be held at a future date