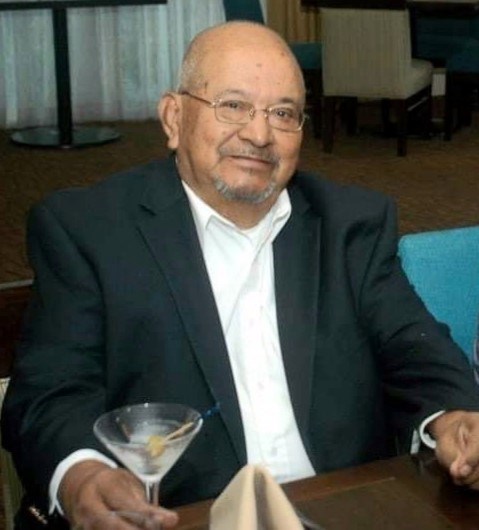 Manuel Caldera October 19, 1929 - April 28, 2022 Fresno, Ca Manuel "Sam" Caldera passed away on Thursday, April 28, 2022 at the age of 92. Born in Hardwick, Ca., he moved to Fresno, Ca in the early 1950's. Sam was the eighth child of Guadalupe Caldera and Tomasa Catano Caldera, both deceased. He was a beloved husband, father, grandfather, great-grandfather, brother, uncle, and Godfather. After graduating from Parlier High School in 1948, Sam entered the army. Upon completion of his basic training he was assigned to the Medical Company, 504th Infantry Regiment, 82nd Airborne Division, out of Fort Bragg, NC. He married Olga Zavala, from Reedley, Ca on October 06, 1951. They were married for 70 years. He worked as a barber for 60 years. During this time he owned his own business, (Bullard Knights Barber Shop) on Palm and Browning across from Bullard High School and after they rezoned the location where Bullard Knights was he continued his barbering at a shop in Highway City for a short time then renting a chair down the street from Bullard Knights on Palm and Bullard and later on Bullard and Marks where he worked for Ray Perez and Terri Perez (Etner) at Bravo's Barber Shop. Sam was an avid golfer, in 1963 he joined (MAGA) The Mexican American Golf Association. His love for MAGA was instant, and he held several board positions throughout his membership with the group; he was also the State President of MAGA from 1972 - 1975. During his tenure he increased membership, starting several new chapters throughout California, and helped with expanding the group to other states Arizona and Texas his vision has made MAGA the largest Hispanic golfing organizations in California. On August 31, 1997 he was inducted into the MAGA Hall of Fame. He was the first male PTA President at Wilson Elementary School while his children were attending. Sam enjoyed many sports, participating and coaching throughout the years. He coached youth baseball teams in the Palm and Shields baseball league, coached Wilson Wildcats youth soccer teams, as well as coaching the adult softball teams, RKT and Fresno Heat, and taking several of these teams to National Championship Tournaments. He loved his rich Mexican heritage and culture and wanted to preserve it. He was an original founder of Ballet Folklorico y Marimba De Fresno which continues on to this day. Over the years, Sam received 3 proclamations from the City of Fresno for his involvement and contributions to the citizens advisory committee and the parks and recreation department. Sam was the elected commander for AMVETS Fresno-Madera Post 99 on November 12, 2018. When he was younger he enjoyed camping, fishing, bowling, golfing, and playing softball. In the 1960's he umpired adult softball games for the City of Fresno. His greatest joy came from having family and friends over for BBQs, and Monday night dinners. Anyone showing up was always welcomed, he would say "the more the merrier ". He was preceded in death by sisters Camila Hernandez, Cora Reyes, and Lupe Orosco, brothers, Joe, John, Eddie, Robert and Ray. He is survived by his wife Olga. Brothers Augie Caldera of Fresno, and Chuck Caldera of San Jose. Daughters and their Husbands Marianna (Charlie) Perez of Sacramento, Ca Lisa (Richard) Franco of Sanger Ca. Alicia (Dave) Pearce of Fresno and his son Sammy and his wife (RaiAnn) Caldera of Fresno. He also is survived by 10 grandchildren, James, Joey, Catrina, Nichole, Desiree, Monique, Reyna, Summer, Samantha, and Samuel. Nine great-grandchildren, Gavin, Brandon, Aidan, Lilly, Alexander, Aurora, Milah, Rosie and Jack. He will be greatly missed by the MAGA family, soccer and softball families, Morro Bay family as so many others that came to know and love him. The family would like to thank; Vern and Lori Castro, Lorraine Herrada, staff of Saint Agnes Hospital, Hospice Care - Saint Agnes Medical Center, the staff of Fresno VA Medical Center, Dr. Basraon, Dr. Chang, Dr. Sekhon, Dr. Wade, Dr. Kim, and Dr. Rainwater. A Rosary will be held Tuesday May 10th, 6:00 pm at Stephen's and Bean Funeral Chapel, located at 202 N Teilman, Fresno Ca, with viewing for the public from 4:00 - 6:00. Funeral services will be held on Wednesday, May 11th at 10:00 am, St. Mary Queen of the Apostles, 4636 W Dakota, Fresno, Ca. In remembrance of Sam Caldera Sr’s Life, the family asks, “In Lieu of Flowers”, that any charitable donations are made to the Fresno Mexican American Golf Association Scholarship Program, the ‘”Sam Caldera Sr. Memorial Scholarship”. Please remit donations to: Fresno MAGA 939 E. Chennault Ave. Fresno, CA, 93720 Make Check payable to: Fresno MAGA For: In Memory of Sam Caldera Sr. Fond memories and expressions of sympathy may be shared at www.stephensandbean.com for the CALDERA family.
See more See Less

In Memory Of Manuel Sam Caldera