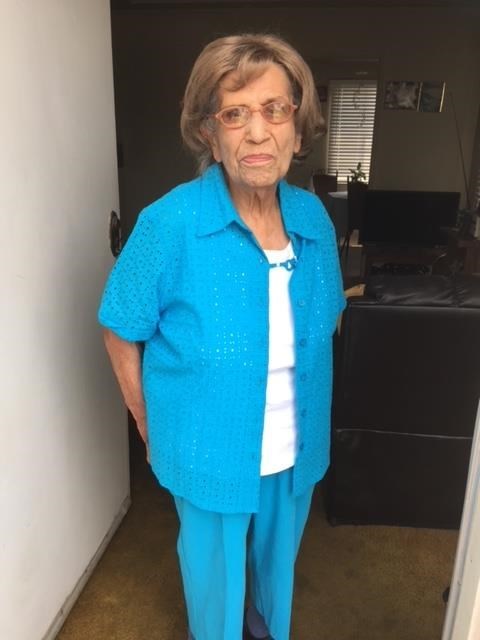 Sally Dominguez Gonzales, "Mama Sally", as she was known to so many who loved and respected her, was born on September 12, 1925, in Fowler, California, to Camilo Dominguez and Maria de la Cruz Dominguez. Except for a few years in the Bay Area, Sally spent most of her life in the San Joaquin Valley. She was married to Albert Esquivel Gonzales, who died in 1970. Her family that has gone before her include her parents, and brothers Ismael Dominguez, Tom Dominguez, Daniel Dominguez, Johnny Dominguez and sisters Ruth Bustillos, Helen Zavala, and Margaret (Numi) Nunez. She is survived by her five daughters and their spouses, Racheal (and Senorino) Zizo, Virginia (and Patricio) Cano, Grace Gastelum, Nancy (and David) Rodriguez, and Antoinette Basye; and her two sisters, Eva Borrego and Mary Smith. Mama Sally was the matriarch of the family, with 19 grandchildren, 61 great grandchildren, and 20 great-great grandchildren. She was a dedicated mother who sacrificed much to raise her children to be responsible and self-sufficient as she. She loved to talk about her younger days of dancing the jitterbug at parties and the Palomar Ballroom in Fresno. For a family of ten siblings, the Dominguez kids were very close and supportive of each other. They worked hard in the agricultural fields in the Valley, as well as in the orchards of San Jose. The tradition of working together continued over the years as they all got married and she became Tia Sally to her sibling's children who worked and played alongside the Gonzales girls. Family gatherings were fun and noisy, with guitar music and traditional Mexican food. Mama Sally lived a happy and full life. She was able to see her family grow and progress and succeed. There is no doubt that she is with her beloved parents and siblings now and that they are celebrating her homecoming. As we mourn for our loss, we also know that she is free from pain and suffering and was ready to go home to a loving Heavenly Father. A visitation for Sally will be held Sunday, September 25, 2022 from 2:00 PM to 4:00 PM at Whitehurst Sullivan Burns & Blair Funeral Home, 836 E. Nees Ave., Fresno, CA 93720 followed by a Recitation of Holy Rosary at 4:00 p.m. A funeral service will occur Monday, September 26, 2022 from 10:00 AM to 11:00 AM, at Whitehurst, Sullivan, Burns & Blair Funeral Home on 836 E. Nees Ave., Fresno, CA 93720. Sally will be laid to rest in Fresno Memorial Gardens Cemetery, Fresno, CA. Serving as pallbearers are Raymond Saucedo, David Rodriguez, Patrick Cano, Antonio Gastelum, Albert Gastelum and Enoch Gastelum. Fond memories and expressions of sympathy may be shared at www.whitehurstsullivan.com for the Gonzales family.
See more See Less

In Memory Of Sally Dominguez Gonzales