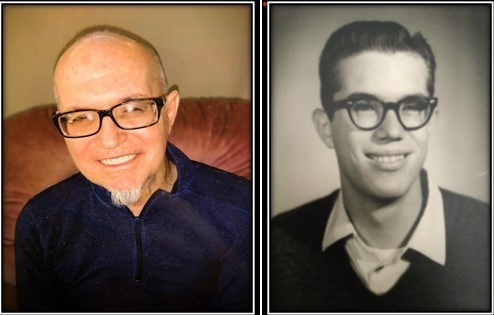 After a year in hospice care, Vernon Leslie Jensen, age 78, peacefully passed away on April 28, 2022, at home with his daughter by his side. Born in Vallejo, California, Vernon, was the only child of the late John S. Jensen and Gladys G. Jensen (Stevens) who were business owners in Northern California. Vernon grew up in Mt. Shasta City, California and graduated from Mt. Shasta High School. He went on to attend both Shasta College in Redding, California and College of the Siskiyous in Weed, California. Vernon worked in the family businesses throughout his life, however, his true passion and career was music ministry. Vernon started playing the piano at age 3 and quickly became proficient. From an early age, it was clear he was extremely talented. He grew up composing, singing and playing his own lyrics and melodies on both the piano and guitar. He was a singer, guitarist and keyboardist in various rock-n-roll bands and eventually went into music ministry with numerous churches and other nonprofit groups. In 1968, Vernon met his wife, Linda Jensen (Hopkins), and they were married in 1969 for 48 years until her passing in 2017. Vernon helped raise his two daughters and taught them to play the piano and guitar as well as to sing, dance and love the Lord. Vernon immersed his family in the Christian community that was his lifelong support. He was gentle, lighthearted and truly loved the Lord. Vernon is survived by his daughter, Deanna Hazelton and her husband Troy Hazelton; as well as his two granddaughters, Madilyn and Sydney Hazelton. He his preceded in death by his wife; his daughter, Malissa Jensen; and his parents. The family asks that any donations made in honor of Vernon Jensen be made towards music ministries or to Oyuna Hospice Inc. 5067 N. Mariposa St., Ste 104, Fresno, Ca 93710.
See more See Less

In Memory Of Vernon Leslie Jensen