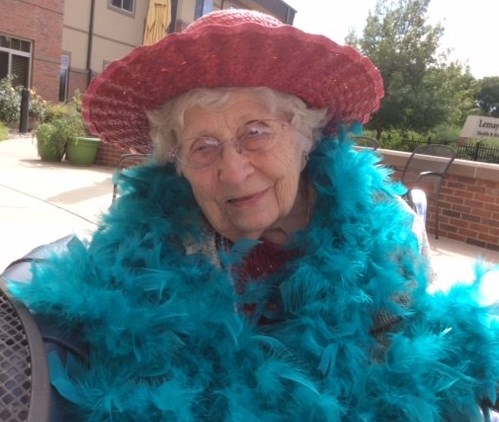 Beatrice Mary (nee Miller) Ducharme passed suddenly and peacefully on July 30, 2022. Bea was just shy of her 107th birthday. Born September 16, 1915, to James C. “JC” and Mary Miller on the family farm outside Brocket, ND. After the family moved to town, she attended the Brocket school, later going on to the University of ND at Grand Forks, where she met her future husband, Paul J. Ducharme, Sr. They were married July 12, 1941, in Pittsburg, CA. Bea and Paul were part of the “Greatest Generation,” with WWII being thrust upon their shoulders. Bea followed Paul around the country, for 3 years, to his different military postings (driving by herself cross-country) until she became pregnant with their son Paul, Jr, who was born while Paul, Sr. was a POW. After the war, Bea set aside her career as a teacher, moving and residing, over the next 16 years, in Massachusetts., California, Indiana, Colorado, North Dakota, Minnesota, finally settling, for the next 44 years, in Omaha Nebraska, all the while raising their 3 boys (Paul, Jr. James, Jacque) and daughter (Cherie). And, in case you are wondering: No. They were not in the military. Once the children were old enough, Bea returned to university to renew her teaching credentials. Bea was a devoted spouse and mother. Her passions were education, teaching, playing piano, and cooking. Bea taught home-economics and music in Omaha public schools for 15 years. Bea was still playing piano well into her late 90’s; playing a little less after 100. She once wore the crown of Kolache Queen of Montgomery, MN 1940. Bea was preceded in death by her husband Paul, Sr. (2005), son Jacque (2007) and son Paul Jr. (2018) and her brothers Archie, James, and sister, Dorothy. She is survived by her brother Ralph Miller (Genevieve), son James A. Du Charme, daughter Cherie A. DuCharme (James Sheppard), daughters-in-law Carlyn Fulton and Mary Prchal, granddaughter Frances DuCharme (Philip Harrison), grandson David DuCharme (Heather), step-grandsons Ryan Austin (Katherine Gaffney) and Kasey Austin (Rhiana) great-grand daughters Jeadon DuCharme, Gabriella Harrison, Taelyn Harrison, Kaycianne Austin, Malea Hoellwarth, Elena Hoellwarth, Mari Austin, and Isla Austin and great-grand son Fulton Austin, along with numerous nieces and nephews, including all of the loved ones by marriage. Bea was an open, caring, generous, loving person. Quick to smile and laugh, and there was always a bit of mischievousness behind the twinkle in her eye. If she had her mind made up about something she could be stubborn and dig her heels in; and you knew you were in for a challenge. More often than not, however, you were in for the cheery, smiling, warm and loving Bea. She could play rag time on the piano, but If there was a polka playing, she wanted, and was ready, to dance. She would sometimes reminisce about her times as a girl dancing at Stump Lake, ND. Later in life, she would grab and hold on to your hand, reluctant to let go. She often talked about going home to Brocket, as Brocket and its residents were always in her heart. Bea will be greatly missed by her family and all of those whose lives she touched. The family wishes to extend its sincere gratitude to the staff of Lemay Avenue Health and Rehab, Ft. Collins, CO for their years of loving care provided to Bea. A memorial mass will be held at Mary Our Queen Catholic Church, 3405 S 118th St, Omaha, NE 68144 on Monday Sept. 12, 2022, followed by a reception at the church. Heafey Hoffman Dworak & Cutler https://heafeyheafey.com/. A celebration of life and reception will be held September 16, 2022 at Allnutt Funeral Home, Ft. Collins http://www.allnuttftcollins.com/. Times to be announced later. In lieu of flowers, the family suggests donations to the Alzheimer’s Assoc. or the charity of your choice.
See more See Less

In Memory Of Beatrice Mary Ducharme

Service time to be announced later.