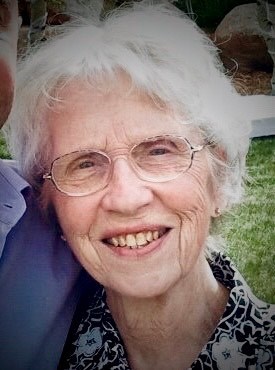 On Tuesday, August 2, 2022, Dawn M. Carter passed away peacefully at the age of 89. She was born Dawn Marilyn Richards on October 31, 1932 in Concord, MA to Fred and Frances Richards. Dawn was strong, energetic, independent, and had a belly clutching laugh – a trait she passed on to her daughters and several of her granddaughters. She graduated from Acton High in 1950 and began nursing school in the fall of that year at Deaconess Hospital in Boston, MA. Three years later, in 1953 she graduated with her nursing diploma. After graduating, Dawn moved to Columbus, OH, where she subsequently met her husband of 40 years, William (Bill) T. Carter, MD. They married on July 26, 1958, and raised five children together. The Carter family eventually moved to Laramie, WY in 1973. After moving to Laramie, Dawn returned to college and graduated in 1979 with her Bachelor’s degree in Home Economics from the University of Wyoming. And Dawn was a home economics whiz! Not only was she an excellent baker (ask anyone about her soft gingerbread cookies) who put together a family cookbook, but she sewed, quilted, knitted, and crocheted; gifting her family and friends with many handcrafted treasures over the years. She taught these skills to several of her grandchildren, and also instructed some of them in the art of cake decorating. In addition, Dawn returned to nursing in 1980 at Ivinson Memorial Hospital, where she worked in Labor, Delivery, and Nursery and was present to welcome several of her many grandchildren into the world. She retired from nursing in 1990. She and her husband, Bill, moved to Hot Springs, South Dakota for several years, where Bill worked at the VA Medical Center. They eventually returned to Laramie permanently. Dawn was very active in her church and community. She regularly attended Church, hosted and attended a women’s Bible study, was a member of a quilting group, and went line dancing at least once most weeks. Just play some George Strait or Josh Turner, and she’d start dancing and singing along. She also greatly enjoyed shopping trips with her granddaughters, as well as family events where she coordinated group games and quizzes. She was always up for enjoying a classic movie – or maybe even swooning a little over Brad Pitt. Dawn took great pride and joy in her family, and every Christmas and birthday made sure that not one of them was forgotten. This was quite the undertaking, as Dawn is survived by her five children, Becky (Eric) Summers, Rock River WY, Amy (Todd) Gregory, Centennial, CO, Tom (Gayle) Carter, Cheyenne, WY, Barry (Karla) Carter, Gothenburg, NE, Sarah (Mark) Rowley, Ft Collins, CO; twenty-two grandchildren: Olivia, Johanna, Victoria, Virginia, Laura, Everett, Emma, Alden, Sophia, and Amelia (Becky’s), Jim, Ashlee, Grace, Hannah (Amy’s), Jimmy Neal, Lauren, Megan (Tom’s), Chelsea, Nolan (Barry’s), Hayden, Heath, and Alexis (Sarah’s); and thirty-two great-grandchildren, with four more on the way. Dawn is also survived by her brother, Fred (Thekla) Richards, Petersham, MA, as well as several cousins, nieces and nephews. Dawn was predeceased by her parents, Fred and Frances Richards, and her husband, Bill Carter. Please join Dawn’s family in a celebration of her life at 2:00 PM on August 27, 2022 at Laramie Valley Chapel, 4801 Quarter Horse Dr, Laramie, WY 82070.
See more See Less

In Memory Of Dawn Marilyn Carter