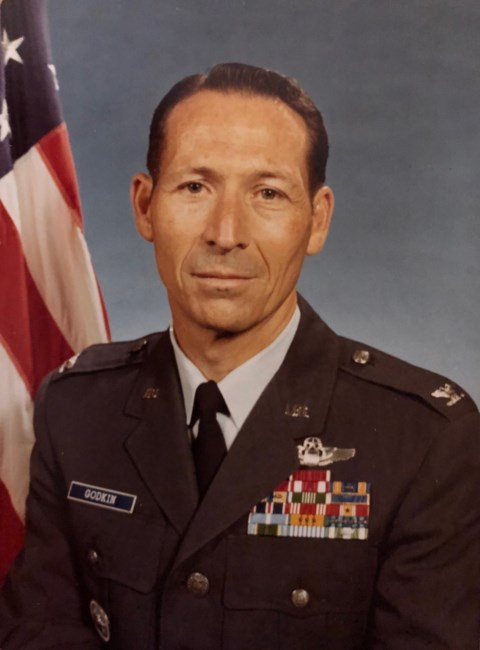 Sheldon (Shelly) Godkin, Colonel, US Air Force (retired) and founder of the University Club at Colorado State University, passed away peacefully on January 18, 2022 in Fort Collins, CO after a short illness. He is survived by his loving wife, Aloma, daughters Anita Godkin and Sherrie (Vincent) DiFronzo, granddaughter Kendall (Rick) May, grandson Bobby DiFronzo, and great-granddaughters Emma and Mackenzie May. He was predeceased by daughter Joanne Suppes and grandson Jesse DiFronzo. Born in New York City on October 17, 1930, Shelly often remarked “I’m the luckiest guy you’ll every meet,” and his life is a testament to those words. A superb athlete, he attended Oglethorpe University in Atlanta, GA, on a basketball scholarship and joined the US Air Force after graduation. Selected into the aviation cadet program, he earned his pilot wings and went on to serve 31 years as a fighter pilot and leader. He accumulated over 4,000 hours flying time, including 100 combat missions in the F-105 Thud during the Vietnam War. Other assignments included Taipei, Taiwan, where he had the opportunity to fly F-100s with the Taiwanese Air Force as a fighter instructor and earned Taiwanese Pilot Wings. His awards and decorations include the Defense Superior Service Medal, Legion of Merit, Bronze Star, Air Medal and others. During his final military assignment as the Commander and Professor of Aerospace Studies of CSU’s AFROTC Detachment 90, he established the Ram-Falcon Trophy, awarded to the winner of the annual CSU vs. USAFA football competition, founded the nationally recognized Wing Walker Drill Team, and inspired countless young future Air Force leaders. Following his retirement from the Air Force in 1983, he established and managed the CSU University Club for 17 years. As a result of his close and long-time association with CSU, he was awarded the “Special Meritorious Service Award” by the CSU President, was named an Honorary Alumnus, and received the “Community Partner Award” for support and dedication to the AFROTC program at CSU. An active member and Past President of the Rotary Club of Fort Collins, he received the “Four Avenues of Service” award, one of Rotary’s highest individual honors. He also served as President of the Longs Peak Chapter of the Air Force Association and the CSU Men’s Science Club and greatly enjoyed his membership in clubs throughout Ft. Collins including the Elks and CSU RAM Booster Club. A private Interment service will be held at Grandview Cemetery in Ft. Collins, CO. Due to COVID-related concerns, the family plans to hold a “Celebration of Life” memorial service at a later date.
See more See Less

In Memory Of Sheldon Ira Godkin