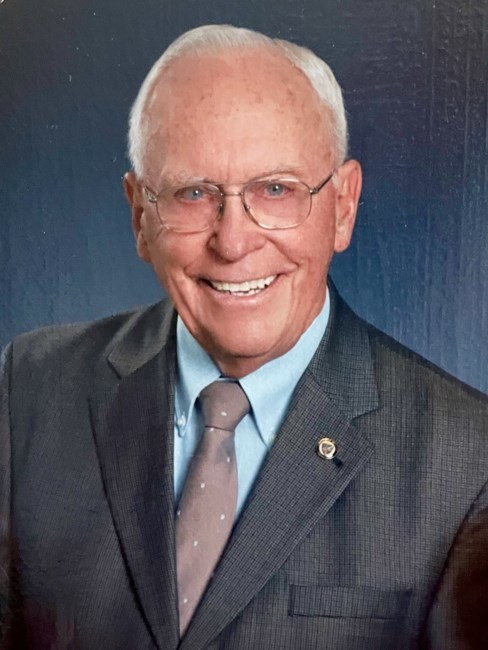 He does not lead me year by year, nor even day by day; But step by step my path unfolds--- My Lord directs my way. Tomorrow’s plans I do not know, I only know this minute; But He will say, “this is the way, by faith now walk ye in it.” And I am glad that it is so, today’s enough to bear, And when tomorrow comes, His Grace shall far exceed its care. What need to worry then or fret? The God who gave His Son, Holds all my moments in His Hand and gives them one by one. -Barbara Ryberg On Thursday, July 28, 2022, Wayne Louis Bondurant, loving husband, father, and grandfather passed away at his home in Loveland, Colorado at the age of 92. Wayne was born on July 7, 1930, in the small ranching community of Rapelje, Montana to Esther and Roy Bondurant along with three siblings. His older brother and sister, Marion and Jean, who along with his parents preceded him in death, and his surviving younger sister Donna. On August 24, 1958, Wayne married Dorothy Friesz in Billings, Montana. They raised two children, Marcello Louis and Marcy Rochel. Wayne’s life was defined by his unfailing love for his family, his commitment to a life of faith and service, his love of the outdoors, his adventurous love of travel, and his mischievous sense of humor. He was also known for rainbow suspenders, keeping favorite sweaters for decades, his wonderful singing voice, and a love of acting. He was a quiet man but didn’t mind the spotlight. Wayne served his country during the Korean War from 1951-1953. He obtained a Business degree from Billings Business College, a BA in Drama from Cascade College, and a divinity degree from the Evangelical Theological Seminary in Illinois. After being ordained into the Ministry, he and Dorothy began their lives of service as missionaries for the EUB Church in Brazil. Over his career, he held various positions within the administration of the EUB church in Brazil and later the United Methodist church in the United States. He retired in 1993 from the General Board of Pensions. Although he thought his work was meaningful, he escaped the city every chance he could to take his family camping and exploring. Cross-country trips to visit extended family and National Parks were a regular occurrence. Wayne’s unofficial second career began when he and Dorothy bought an RV and moved back to the Western States to rejoin family and return to the part of the country Wayne loved best. He continued to serve the Methodist church, along with Dorothy, through overseas mission work and with the Nomads, a group of RVers who travel to do work projects within the US. They completed over 40 projects and visited five continents before their “second retirement”. He even briefly rekindled his acting career. He was very active in the United Methodist Men, the Boy Scouts of America, and the Bondurant Family Association. Family was very important to Wayne, and he went out of his way to stay in touch. He had a long list for Christmas cards, a round-robin letter with his siblings, nieces, and nephews, and he made a point of visiting with his extended family, often going out of the way or making special trips. He is survived by his wife, son, and daughter, and two grandchildren, Kalyn Marie and Jean Louis. They all credit their ability to build a proper campfire to the lessons Wayne taught them on innumerable family camping trips and their ability to enjoy thousand mile road trips to his love of driving the open road. He gave the best hugs, always had a smart remark ready, and showed his love through his everyday actions. A funeral service will be held on Friday, August 5th, 2022 at Christ United Methodist Church, 301 E. Drake Rd, Fort Collins, Colorado at 11:00 o’clock a.m. In lieu of flowers please make a donation to a charity of your choice or to Christ United Methodist Church.
See more See Less

In Memory Of Wayne Bondurant