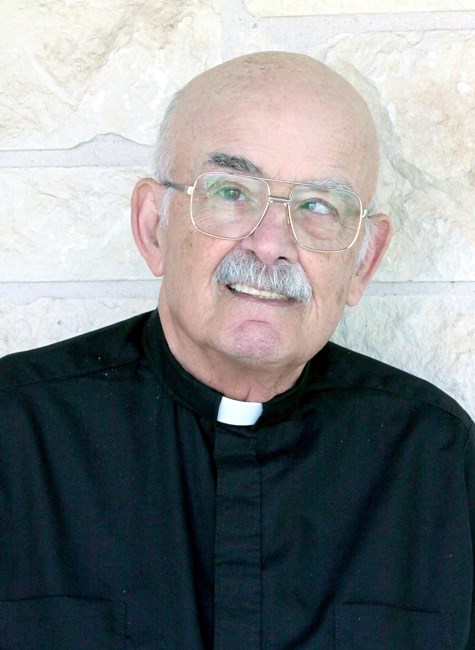 Rev. Angelo Bertini, a Catholic priest for 46 years, died on January 13, 2020 in Georgetown, Texas at the age of 83. He was born on July 29, 1936 in Galveston, Texas to Marion and Catherine (Cinelli) Bertini. Rev. Bertini received an undergraduate degree in Chemistry from the University of St. Thomas in Houston, served in the U. S. Army for seven years, then earned a master’s degree in Theology from the University of St. Mary in San Antonio. He attended Assumption Seminary in San Antonio as well. Rev. Bertini was ordained for the Diocese of Austin on May 12, 1973. His first assignment was as associate pastor at St. Louis Parish and chaplain at Reicher High School, both in Waco. Since then he served at St. Mary in College Station, St. Michael in Burlington, St. Ann in Rosebud, St. Louis in Waco again, St. Eugene in McGregor, St. Joseph in Waco, St. Mary in Waco, and as chaplain at Cedarbrake Retreat Center in Belton until his retirement in 2015 when he moved to the St. John Paul II Residence for Priests in Georgetown. Rev. Bertini was preceded in death by his parents, his brothers John E. Bertini Sr., Marion J. Bertini, Jr., and his sister Mary Ann Bertini Gately. He is survived by nieces and nephews: Rosemary McGowan, James Gately Jr., Kathleen Gately, Mary Frances Chohrach, Anne Marie Dunaway, Christopher D. Bertini Sr., and John E. Bertini Jr. He is also survived by great nieces and nephews: Michael Dunaway III, Christopher Dunaway, Catherine Dunaway, Nathaniel Chohrach, Abigail Chohrach, Christopher D. Bertini Jr., Francesca F. Bertini, Matthew J. Bertini, Juliana Bertini Brown and Joseph E. Bertini. Viewing will be on Friday, January 17 at 6:00 p.m. at St. Helen Catholic Church (2700 E. University Ave., Georgetown, TX). Vigil for the deceased with recitation of the Rosary will follow at 7:00 p.m. Mass of Christian Burial at St. Helen Catholic Church will be on Saturday, January 18 at 10:00 a.m. Rev. Bertini will be buried at Calvary Catholic Cemetery in Galveston on January 25 at 1:00 p.m. In lieu of flowers, donations may be made to Catholic Charities of Central Texas (1625 Rutherford Ln., Austin, TX 78754) or to Annunciation Maternity Home (3610 Shell Road, Georgetown, TX 78628).
See more See Less

In Memory Of Reverend Angelo Bertini