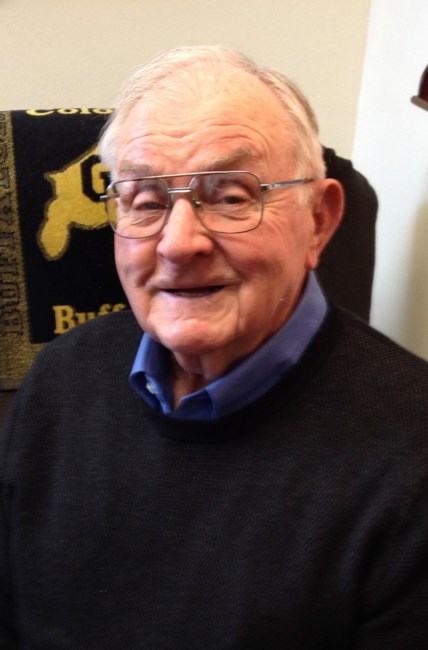 Dr. Billy Ray Myers, age 98, formerly of Gering and a current resident of Western Nebraska Veterans Home passed away at Regional West Medical Center on January 19, 2022. Bill was born to Raymond “Chief” and Vera Myers on March 8, 1923 in Gering, grew up as a “Sugar Tramp Kid”, and graduated from Minatare High School in 1941. Upon his father’s relocation with Great Western Sugar Company to Fort Morgan he attended the University of Colorado where he was considered a “living legend” as a CU Buffalo football player. His education was interrupted when he enlisted in the Navy to serve during World War II as a naval aviator. Bill was married to Barbara (Neeley) in 1946 and then returned to Boulder to complete his bachelor’s degree. Later he received his Doctor of Veterinary Medicine at Colorado State University and co-founded Pioneer Animal Clinic. After retiring from that business he and Barbara purchased and operated Velma’s Pet Shop in Gering. He was, at the time of his passing, the oldest living veterinarian in the State of Nebraska. He was involved in civic activities including serving as secretary of the Gering School Board. He loved golf, did well in pool tournaments, horse-shoe contests, and bingo at the Veteran’s Home. In his final years he developed a taste for a daily dose of Mountain Dew, basking in the sun, and watching contrails. Bill is survived by his son, Rick (Suzanne) Myers of Gering, grandchildren Andrea (Pete) Culhane - Scottsbluff, Eric (Jeni) Myers – Grand Junction, Colorado, Nicola (Shawn) Bennington – Millikin, Colorado, and Ryan (Vicki) Myers – Surprise, Arizona. His three great-grandchildren are Tori Mudd, Connor Mudd and Colin Myers. He was preceded in death by his wife Barbara, son Michael Myers, daughter-in-law Deb Myers, his sister Betty Sue Conklin, his in-laws, and his parents. A memorial graveside service will be Saturday, June 18, 2022 at 9:00 a.m. at West Lawn Cemetery with military honors by the Navy Honor Guard. A celebratory gathering will be held Saturday, June 18, 2022 from 10:00 a.m. to noon at the Legacy of the Plains Museum. In lieu of flowers, memorials may be made to Legacy of the Plains Museum. Fond memories and expressions of sympathy may be shared at www.geringchapel.com for the Myers family. Gering Memorial Chapel is assisting the family with arrangements.
See more See Less

In Memory Of Billy R Myers

Legacy of the Plains