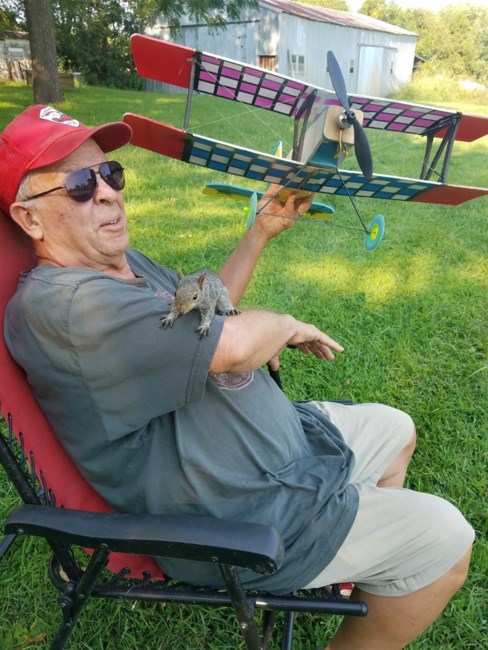 Danny Williamson, age 77, died peacefully on September 4, 2022. Danny was born on November 22, 1944 in Kansas City, Missouri to Eugene and Jean Williamson. He graduated from Park Hill High School in 1962, and attended Missouri State. After attending Missouri State, Danny enlisted in the Air Force. Danny married Debbie in 1988. He has 4 sons and a daughter Danny was an accomplished model airplane builder, flyer and fisherman. Danny spent his career at the Kansas City Ford plant in Claycomo, Missouri, and retired in 1994 at the age of 49. Danny was an active member of the Kansas City Northern Knights and KC Flying Circuits. Danny was a generous and giving man who never met a stranger. Danny was also musically talented and a member of the barbershop quartet and loved playing the organ. Danny is preceded in death by his parents, and Sister Kathy G Glenn. Danny is survived by his wife Debbie, Sons Jeffrey (Angela), Matthew, and Andrew (Jennifer), and Alan (Angela), and Daughter Yvonne (Larry) Brown. Grandchildren Amanda (Clark) Gieseke, Amanda (Patrick) Ford, Tyler Williamson, Madison Venn, Abigail Williamson, Nathan Williamson, Brody Williamson, Blake Williamson, Samuel Williamson, and Avery Williamson. Step-Grandchildren Blake, Larry, and Lane Brown. Great Grandchildren Parker Kay Ford, and Ada Mae Gieseke. The family would like to thank the caregivers at Liberty Hospital. The family has requested that donations be made to KC Northern Knights R/C Flying Club: https://www.northernknights.com/ or KC Flying Circuits: https://www.facebook.com/Tom.Wally.Misiorowski A memorial service at Hillside Christian Church will be announced at a later date.
See more See Less

In Memory Of Danny Eugene Williamson