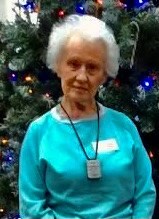 Florence "Jean" Daws of Peoria, Arizona passed away on July 27, 2022 in Peoria, Arizona at Pacifica Memory Care. She was born on January 13, 1932 to the late Malcom and Emily (Mugford) Moore in Briggs Junction Newfoundland Canada. She immigrated to the United States in 1949 and settled in Freeport, Illinois. When her husband was drafted in Marine Corp Jean resided in California. She kept busy working in a photo shops and became a proud naturalized citizen of the United States. in 1959, she moved to Arizona. She accepted a position with Motorola working as a Data Specialist. Analysis for 34 years. In her honor of 10 years, perfect attendance they awarded her with an anniversary clock. In April of 1962, Jean married Dayton L. Daws in Las Vegas, Nevada. Jean and Dayton celebrated 51 years of marriage until his passing on January. 16, 2014. Jean was a starting member at the St. Mary Episcopal Church, Peoria, Arizona. She served on the Chalice Bearer, building committee, and rebuilding committee after the fire. She was a charter member of the Eastern Star, Lodge # 59. In 1972, after years of working her way up she achieved the level Worthy Matron. She had three German Shepherd dogs; Smokey, Rocky and Keno. On morning walks, Jean would always make special time to acknowledge her former neighbor’s pets with a kind word and a gentle pat on the head. Jean was a good cook, however she was most remembered by the family for her gravy. Never a lump. She loved working out in the yard with her flowers and keeping things tidy. She liked eating out with her husband Dayton, spending time with family and friends. In her later years she enjoyed bean toss games and walking. Jean is survived by her daughter Debra L. Reed, Freeport, Illinois, step daughter Pat (Pete) Rose, Cottonwood, Arizona., and stepson David (Pat) Daws, Freeport, Illinois., 5 step grandchildren, 13 step great grandchildren, 16 great great grandchildren, friends and good friend Carol Kralovetz. She is preceded in death by her parents, husband Dayton, infant grandchild, and step son-in-law Pete Rose. Funeral services will be held at 11 AM on Thursday, August 4, 2022 at St. Mary Episcopal Church, 6501 N. 39th Ave. Phoenix, AZ with Father Craig officiating. The family would like to thank all the care given by Vista de Rio, Pink Ladies, Pacific Memory Care, Hospice of the Valley, Eastern Star and former neighbor friends. In Lieu of flowers please donations to the American Humane Society. Fond memories and expressions of sympathy may be shared at www.ChapeloftheChimesMortuary.com for the Daws family.
See more See Less

In Memory Of Florence Jean Daws