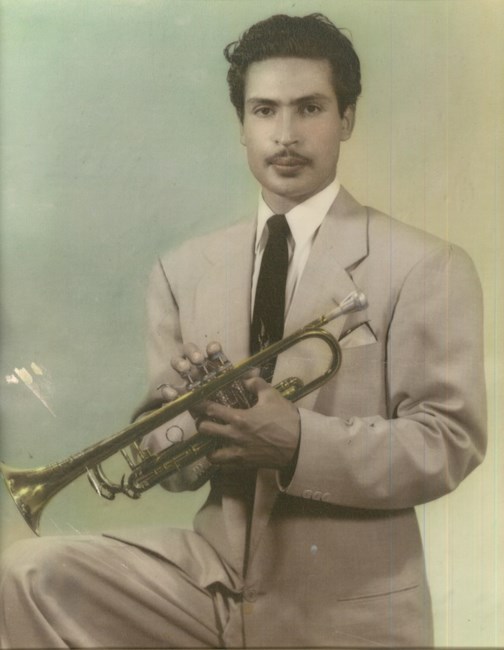 José R. Chavez was called to Heaven surrounded by his children early morning on May 5, 2022. José was one of six children. He was born on October 18, 1925 in Durango, Mexico to the late Lino and Petra Chavez. While growing up in Mexico, he developed a passion for music and became a musician. In 1950, José came to the United States to build a better life. Shortly after moving, he met his wife Hortensia Aroz-Arce; they were married on October 17, 1955. He would often describe how he felt dizzy the day they met. José worked hard in construction during the day and came alive when he played and composed music at nights and on weekends. He is survived by his seven children Mike Arce, Leonard Arce, Lydia Aguirre, Jenny Thomas, Diane Vizcaya, Cecilia Chavez-Calvo & Joe “Gus” Chavez, and two brothers Ignacio & Mauro Chavez. He was blessed with 24 grandchildren, 46 great grandchildren with two more on the way, and numerous nieces & nephews. He loved nothing more than to hold each child in his arms when they were babies. He could build anything and often spent his time building toys for his children and grandchildren to entertain them between music lessons. He passed on his lifelong love of music by teaching his children, grandchildren, great grandchildren, nieces, nephews, and neighbors to play various instruments. His love of music will live on through his descendants as one of his last wishes was to keep all his instruments together in the care of his son, Gus to loan them out to family members who wish to learn how to play. Along with his passion for music, he had a true love for travel and exploring new places. He enjoyed traveling to California, Maine, New York City, Texas, Chicago, and Montana. His last adventure was to Florida where he saw alligators in the wild. José will be dearly missed by all who knew his kindness, generosity, creativity, and astounding story telling. His family would like to thank Amparo and Avita from St. Teresita Church and the nurses, aids and music therapist for supporting his children and making him comfortable during his final days at home. In addition to his parents, José was preceded in death by his wife Hortensia, and 3 siblings Juanita Rodriguez, Jesus Chavez, and Ninfa Zamora. A Mass of Christian Burial will be celebrated on Monday, May 16, 2022, at 10:00AM at Santa Teresita Church, 14016 N. Verbena Street, El Mirage. Prior to the mass, a rosary will be said at 9:00AM. Family and friends are invited to a viewing on Monday, May 16, 2022 from 2:00PM-3:00PM at West Resthaven Funeral Home, 6450 W. Northern Avenue, Glendale.
See more See Less

In Memory Of José R. Chavez