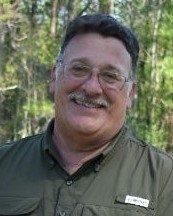 Isaiah 57: 1-2 Good people pass away; the godly often die before their time. But no one seems to care or wonder why. No one seems to understand that God is protecting them from the evil to come. For those who follow godly paths will rest in peace when they die. Fabian Payne Brignac, 59, a life-long resident of French Settlement, passed away peacefully at his home on Monday, Aug 1, 2022, surrounded by his loving family after a short battle with pancreatic cancer. He is survived by his high school sweetheart and loving wife of 40 years, Marilyn Garnette Brignac; 4 daughters and spouses, Jamie Lobell (Josh), Ashley Aime (Jimmy), Buffie Harrell (Brady), and Amy Jo Landry (Ryan); 11 grandchildren, Tucker, Lily, Brailey, Kate, Clara, Olivia, Reid, Zach, Reise, Mia, and Gunner; 2 brothers, Shelby (Agnes) and Ricky (Yannick) Brignac; Sister-in-law, Patsy Brignac; 3 God-children, April Matherne, Sophie Vicknair, and Scott Brignac; Godparents, Sandra Matherne and Shelby Brignac; Father-in-law, Silvie McMorris, Sister-in-law, Tammy Hughes (Danny), Brothers-in-law, Randall (Tina), and Gerald (Cheryl) McMorris. He was an honorary Bankston brother to Alvie and Earl Bankston. He was preceded in death by his parents, Amedee, Sr. and Amelie Brignac; brother, Amedee Brignac Jr.; Mother-in-law, Janette McMorris. Fabian was a devoted member of St. Joseph Catholic Church and Knights of Columbus. He was an avid turkey hunter and loved spending time with his family and grandchildren. Fabian served 42 years in the firefighting field. At the age of 15 he became the youngest Fire Chief in Louisiana for the French Settlement Volunteer Fire Department where he served for 20 years and after retirement, he continued to serve on the District 8 Fire District Board until March 2022. After a 32 year firefighting career with the City of Denham Springs Fire Department, Fabian retired as Assistant Chief. A visitation will be held on Thursday, August 4, 2022 from 5 pm until 8 pm at Ourso Funeral Home Gonzales, La. Visitation will resumes on Friday, Aug 5, 2022 at St. Joseph Catholic Church, French Settlement, La from 9 am until mass of christian burial at 12 pm. officiated by Father Jason Palermo. Fabian will be laid to rest in the St. Joseph Catholic Church Cemetery. Pallbearers will be his firefighter brothers from the City of Denham Springs, Alvie Bankston, Woody Cutrer, Jason Populus, WC Needham, Tommy Sanders, Dennis Greer, Jason Simeon, and David Terrell. Honorary Pallbearers will be his four grandsons, Tucker and Gunner Lobell, Reid Landry and Zach Harrell along with Scott Brignac, Wendell Harrell, Derek McMorris, and Lonnie Keller. The family wishes to extend their heartfelt gratitude to Dr. John Knapp, Dr. Vince Cataldo, the nurses at OLOL Oncology Infusion Center, and Amedisys Hospice, with special thanks to Kevin Cotton, RN. In lieu of flowers, donations can be made to St. Jude Children’s Hospital. Arrangements by Ourso Funeral Home. Fond memories and expressions of sympathy may be shared at www.oursofh.com for the Brignac family.
See more See Less

In Memory Of Fabian P. Brignac