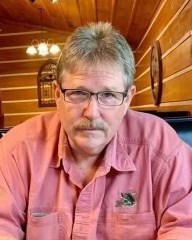 Joel Moore passed away on January 23, 2022 at the age of 61. He was a native of West Memphis, Arkansas and a longtime resident of Saint Amant, Louisiana. He leaves behind to cherish his memory his loving wife, Diane Melancon Moore, his children; Franklin “Jamie” Danks and his wife Ashley Bonanno Danks, Amanda Danks Bonderer and her husband Andrew Bonderer, Joseph Richard Moore and his wife Lindsey Gabrielle Moore and Amanda Lea Allen and her husband Charlie Joseph Allen. He was the proud grandpa of Brendan Grant Danks, Mia Grace Reeves, Isabelle Reese Danks, Wyatt Andrew Reeves, Derek Joseph Allen, Caleb Thomas Moore, Austin James Bonderer, Harper Estella Moore, Greyson Lee Allen and Colin Andrew Bonderer. Joel was born on September 23, 1960 to the late James and Bonnie Ferrell Moore. He is preceded in death by one brother and survived by his four sisters. Joel was also survived by numerous nieces, nephews, family members and friends. Although Joel was born in Arkansas, Louisiana was in his blood. He loved the outdoors and everything Cajun. You could always find him hunting, fishing, watching football or having a cook out with those he loved. Joel was a family man through and through. He worked hard his whole life to provide for his family the best he could. Joel never met a stranger and would do anything he could to help those around him. Those traits will live on in his pride and joy, those grandbabies. His fun-loving personality and heart of gold will truly be missed by so many. Family and friends are invited to attend a Celebration of Joel’s Life on Friday, January 28, 2022 at Ourso Funeral Home in Gonzales. The visitation will begin at 12 Noon until the start of the service at 2PM. There will be a private burial to follow at Hope Haven Garden of Memory Mausoleum in Prairieville. Those honored to serve as pallbearers will be Preston Hollier, Terry Olivier, Greg Williams, Harry Guillot, Jared Bercegeay, Wyatt Reeves, Mike Latiolais and Dain Christman. Fond memories and expressions of sympathy may be shared at www.oursofh.com for the Moore family.
See more See Less

In Memory Of Joel Moore