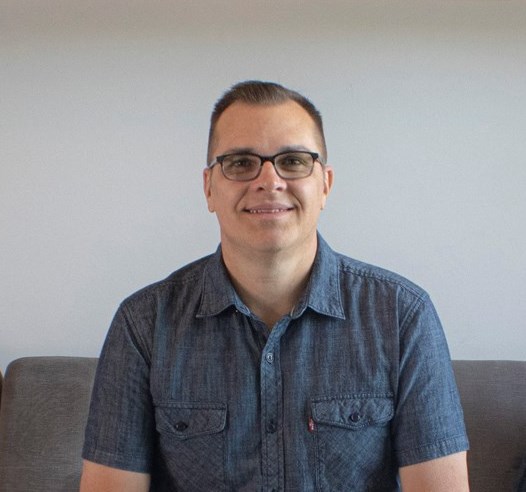 Christopher Allen Swain was born in Tehran, Iran, on August 26, 1973, to James and Sandra Swain. He was the joy of their life. Chris lived all over the world with his parents and older sister Shannon while James served in the United States Army. Some of his fondest memories were exploring castles in Germany, reading Captain America comics, and watching the Dallas Cowboys. Chris came to Christ at First Baptist Church Springdale, Arkansas (now Cross Church) when he was sixteen. A faithful small group leader led Chris to Jesus, and he never looked back. After graduating from Springdale High School, Chris joined the United States Marine Corps and faithfully served our country. He kept the Marine Corps haircut, except for a brief time in the 2000s when he tried to grow his hair out like everyone else. It didn’t last long because Chris could never be like everyone else. Returning to Arkansas after his discharge from the Marine Corps, Chris met Melissa at church. He wooed her with his handsomeness, humor, and Bubblicious Gum. They both fell hard and fast, and were married on November 14, 1998, at their home church, First Baptist Church of Springdale, Arkansas (now Cross Church). Chris and Melissa served in ministry together in Florida, Texas, Arkansas (twice), Georgia, and Tennessee. Chris also had the opportunity to work at LifeWay Christian Resources, a place and people he loved. Since coming on board with Replicate and Long Hollow Baptist Church in 2016, Chris was in his sweet spot. He combined all of his experience to equip local churches to help them make disciples who make disciplemakers. He loved every minute. Aside from Jesus, Chris’s greatest love was his family. He became a proud dad when Caedmon was born in 2007, and excitedly donned the title “girl dad” when Honor was born in 2011. He loved them fiercely and spent immeasurable time with them, doing whatever they enjoyed. Even more than that, he pointed them to Jesus. He always had just the right way to explain what the Bible says about any topic so they could understand, and he modeled a love of Jesus in front of them daily. To Melissa, Chris was the love of her life, best friend, strong and gentle leader, encourager of adventure, and quiet resting place. He helped shape her as a believer in Christ, wife, mom, and friend. Over half of Melissa’s life has been spent as Chris’s wife, and she would not be who she is today without his love and influence. Chris’s life verse was Acts 13:36. Not something one might expect, but completely suitable for Chris. “For David, after serving God’s purpose in his own generation, fell asleep, was buried with his fathers, and decayed,” (CSB). Chris always wanted to live a life that served Christ, whatever that looked like. He recently told a colleague that he had accomplished all the major things he’d wanted to, and the rest of his life would be about helping others do the same. Chris’s legacy is insured in another way through his registration in the organ donor system and the gift of life-saving organs. When Chris met Jesus on Thursday, July 15, 2021, he was reunited with the friends and family who have gone before him. His family and friends still on earth look forward to the day they are all together again and fully depend on Chris to have the best fishing spot ready and waiting when they arrive.
See more See Less

In Memory Of Christopher Allen Swain