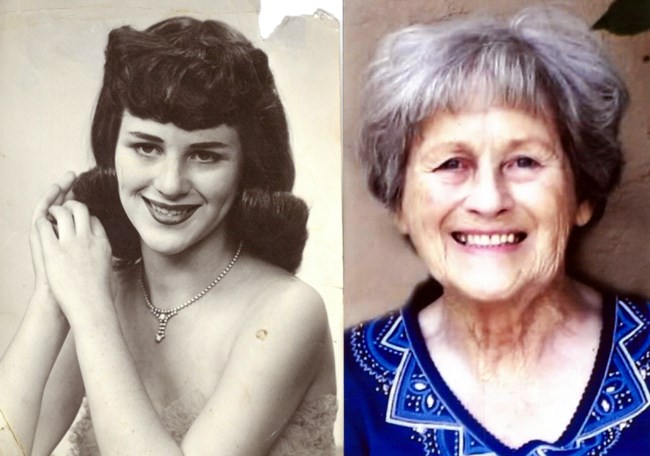 Dolly was born in an adobe dwelling north of Loma, Colorado, on May 4, 1940, the daughter of Thelma Gertrude Sheets Palmer and Sylvan Jack Palmer. She lived a somewhat nomadic childhood as her father’s work as a miner took them to different locations including Washington, Nevada, Utah, and finally back to Colorado, where she attended and graduated from Fruita High School. Her high school years were highlighted by being a cheerleader and selected to attend Colorado Girls State. After graduation the family moved to Moab, Utah, where she met her future husband, Joe Johnston. They married in Gallup, NM, in 1958. Their first child, Joe Jr., was born in 1959 and they moved to Anchorage, Alaska, where two daughters, Meta and Dana, were born. Returning to the lower 48 in 1963 the family settled in Cortez, CO, where son, Jon, arrived, completing the family. In 1966 they moved again, this time to Grand Junction, CO. Dolly was a devoted mother, spending hours shuttling the kids to various school functions and sporting events and practices. Her “spare” time was spent with numerous crafts, such as quilting, stained glass, and leather work, but the entire family was involved in archery, which sport she excelled at, winning numerous state championships both in Alaska and Colorado. Her crowning achievement was 1st place in the National Field Archery Association Southwest Sectional Women’s Bare Bow event. Known for her compassion and caring, Dolly’s priorities were always geared to the well-being and health of her family and especially the grandkids and great-grandkids. Following her father’s heritage she was a proud member of the Choctaw Nation of Oklahoma and advocated for the plight and well-being of all Native American cultures and tribes. Dolly was preceded in death by her parents; infant sister, Coleen Faye; younger brother, Jimmy; and her son, Joe Jr. She is survived by husband, Joe; daughters, Meta Johnston and Dana Elliott; and son, Jon (Lisa) Johnston; twelve grandchildren; and nine great-grandchildren. Services will be held at a later date.
See more See Less

In Memory Of Dolly Leah Johnston