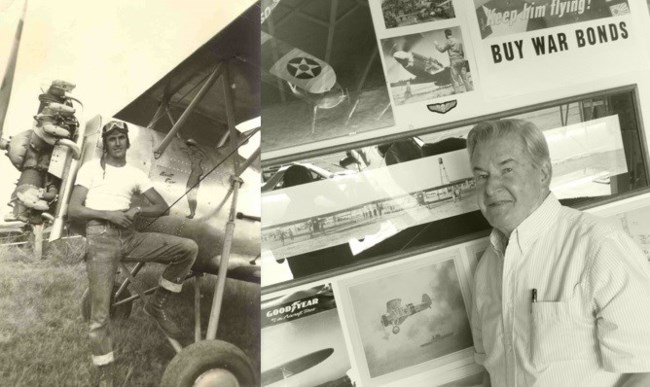 Gerald "Gerry" Milton Miller passed away, peacefully at home, with close family by his side on Sunday March 6, 2022. He was the son of John Thomas Luther Miller and Desdemona Davis and was born in Milliken, CO on October 8, 1927. He was preceded in death by his parents and three brothers, Thomas “Kay” McKay Miller of Bothell, WA, Melvin “Bud” Winfred Miller of Bakersfield, CA, Jack Luther Miller of Fort Collins, CO and niece Tamara Jean "Tammy" Miller-McKeown of Bakersfield, CA. Gerry’s older brothers, Kay and Jack were both pilots during WWII. However, being too young to enlist with them, Gerry waited until he was old enough to join and spent the final years of WWII serving his country in the U.S. Navy. After the war was over, Gerry worked for the Union Pacific railroad in Laramie and Cheyenne, WY while attending college at the University of Wyoming. When his brother Kay returned home after serving as a B-25 pilot in the Army Air Corps, he began to teach Gerry to fly in a 1946 Meyers OTW-165 biplane. After soloing in 1950, Gerry and Kay both decided that they would like to obtain their A&E tickets and enrolled at the University of Denver-Skyranch Aeronautical School. Gerry received his A&E license in 1951 and promptly began the restoration process on his Meyers OTW. That particular aircraft was the first in a series of over 25 antique/classic aircraft that he meticulously restored from 1951-2010. He was a licensed FAA A&P/IA for well over 50 years. Gerry worked at NCR (National Cash Register) as a District Sales/Technical Specialist for over 25 years starting in the Denver, Colorado branch office. He met Nancy Charlene Miller in Denver where they were married in 1961, and celebrated their 60th Wedding Anniversary in July 2021. Gerry and Char relocated to Dayton, Ohio in 1968 and their only son Randall Davis Miller was born in 1969. Gerry was offered an opportunity with NCR to transfer back to Colorado in 1979, where he resided in Grand Junction for the past 43 years. Gerry has been a fixture of the Mack Mesa Airport since arriving back in Colorado in the early 1980s. His maintenance shop was always a welcoming place for friends to stop by to view the most recent aircraft restoration, to joke and laugh over coffee and he was always willing to provide mechanical assistance or guidance for anyone who asked. You could never find a more loving husband, Father and friend. He will be remembered fondly and missed tremendously by those that knew him. Gerry was blessed with a wonderful life, and though the last few years have been difficult, he never lost his sense of humor or quick wit. Gerry is survived by his loving wife Nancy Charlene Miller, his eternally grateful son Randall Davis Miller, his daughter-in-law Amanda Nicole Miller and grandchildren Ashley Evelyn Maurer and Alexander Edward Maurer and many other nephews and nieces. The family would like to extend our deepest love and appreciation to family friends Jay Scheevel of Fruita, Colorado and Rocky Smith of Loma, CO for their constant help and support through the years. We would also like to thank the wonderful staff from Abode Hospice & Home Health for their grace, kindness and care. At Gerry’s request, no formal services are being planned. A celebration of Gerry’s life will be held later this year. “The Final Touchdown” By Dutch Redfield During a lifetime in aviation, I have experienced only one forced landing. It was not difficult. The dead-stick glide began at three thousand feet. There were several suitable fields from which to choose. Things worked out nicely. Yet I know that I have one more forced landing lurking and waiting for me out there. I believe that at this stage of my life, I am ready for it. Perhaps there will be a warning, maybe not. Will there be time for me to plan a good approach to this final touchdown? Will it be a hasty no-power, no-options, straight ahead steep descent to a walloping hard touchdown? Or will it be a soft, afternoon peaceful glide? Whatever, for this final glide, I ask only for an open cockpit, so I can, however briefly, savor for the last time the feels of flight, as biplane wings forward of me exquisitely frame and record the slowly changing, tilting scenes as I maneuver and silently bank and glide onto what I have long known will be my very final approach. Please, no helmet, so old ears can best sense vital changes in speed, relayed through the lovely sounds of whistling interplane struts and wires, and so cheeks and bared head can best read changing airflows swirling behind the cockpit’s tiny windscreen. Below, in a forest of trees, lies a grassy field long ago set aside for biplane flyers of old. It looks small and tiny. With lightly crossed aileron and rudder I’ll slip her a few inches over the fence. I’ll level her off, then hold her off, with wheels skimming the grass tips. The lift of the wings, the sounds of flight, rapidly diminish. With stick full back, lift fades; a slight tremor, then she and I are bumping and rolling across the beautifully sodded field. The wooden propeller remains still. We roll to a stop. I have no belt to loosen. I raise my goggles and slowly climb out. Suddenly there is applause, then bear hugs and slaps on the back. “Hey, you old goat, you really slicked that one on!” I am with old friends. Fond memories and expressions of sympathy may be shared at www.callahan-edfast.com for the Miller family.
See more See Less

In Memory Of Gerald M. Miller