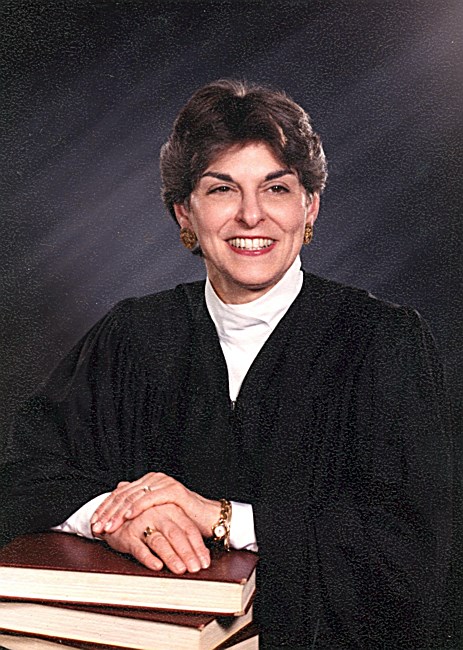 The Honorable Jo Ann C. Stevenson (ret.)—world traveler, passionate consumer of books; genius-level at the N.Y. Times spelling bee; chief judge of the US. Federal Bankruptcy Court for the Western District of Michigan; lawyer; linguaphile (French, Spanish and especially Italian); art and music lover (even country music); ball room, swing and tango dancer; master of elegance and class; boss lady and cat Mom; Sicilian in heritage and soul; Irish in temperament; warm hugger; extraordinarily generous; Rutgers alumna 1964, Detroit College of Law 1979 (now Michigan State University College of Law), daughter, wife, mother grandmother, aunt and friend, passed away on Friday, September 9, 2022, after a courageous battle with cancer. Jo Ann C. Stevenson was born during World War II in Seattle, Washington on October 2, 1942 to her mother Anne R. Bonomolo and John White, a soldier training for the European Theater. Her parents separated after the war. Her mother remarried Dominick Thomas Cacavio who became her father through adoption. She grew up in Hamilton, N.J. The first female college graduate from her mother’s Sicilian family in New York and New Jersey. She graduated in 1964 form the Douglas Women’s College of Rutgers University, majoring in French. In 1976 she decided to pursue a law degree at the Detroit College of Law where she graduated in 1979. She clerked in the Michigan Court of Appeals and for the late Judge Cornelia Kennedy, first in the United States District Court, Eastern District of Michigan and then in the United States Sixth Circuit Court of Appeals. She worked several years as a bankruptcy attorney in Detroit for the former Hertzberg, Jacob & Weingarten law firm. The United States District Court for the Western District of Michigan was established during the Civil War under President Abraham Lincoln. In 1987, she became the first female judicial appointee of the Western District when the Sixth Circuit Court of Appeals selected her to serve as a federal bankruptcy judge, a position she held until she retired in 2007. She loved her staff and her service as a judge and quickly gained the respect of the bankruptcy bar. Regardless the litigants she always tried hard to rule based on the law tempered with justice which led to a remarkable record of appellate affirmations of her decisions. In retirement, she traveled extensively including many times to Italy, was a member of the Women’s City Club, the University Club, and the Union League Club of Chicago. She is survived by her husband, Marshall W. Grate, Esq.; her son Kenneth Campbell Stevenson III, and her daughter-in-law Alison Stevenson; her grandchildren, Campbell, Connor, and Tucker, Riley Anne, and Andrea; her step children, Rhodora Vennarucci, Keturah Finch, Clayton Consalus, and Jennifer Keegan; and by her half brother Michael White and half sister Nancy Guerry. She loved life, was brave, adventurous, and always intellectually curious; she overcame adversity with quiet resolution, generous to a fault, unpretentious about her accomplishments and never boastful. Her life was an incredible gift and treasure to her husband, family, friends and West Michigan. Plans are underway for a private memorial service.
See more See Less